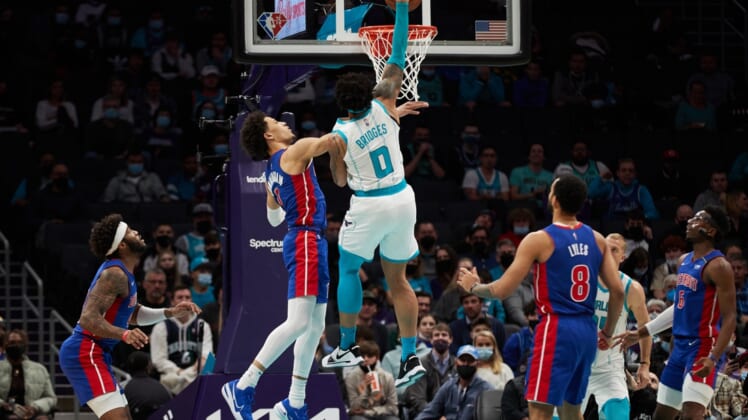 Kelly Oubre Jr. hit a career-high nine 3-point shots on the way to 32 points as the Charlotte Hornets whipped the visiting Detroit Pistons 140-111 on Wednesday night.

Oubre was 10-for-16 overall from the field, attempting 14 shots from 3-point range. Eight of his 3s came in the fourth quarter for the Hornets, who made 24 of 42 3-pointers in the game.

Trey Lyles led the Pistons with 17 points. Cade Cunningham added 16 points, Josh Jackson had 15 and Saddiq Bey scored 11. Micah Potter had eight points, but didn’t score in the second half.

The Pistons have lost 11 of their last 12 road games but they were coming off Monday’s shocking win at Milwaukee.

Lyles scored eight points in a stretch of less than three minutes in the third quarter to keep the Pistons in range at 84-70. Charlotte responded with a 16-5 run to end the quarter.

The margin grew to 36 points less than four minutes into the fourth quarter.

Bridges had 11 first-quarter points as the Hornets built a 37-19 edge. Charlotte was 7-for-11 on 3s in the quarter, while the Hornets got 13 points from reserves.

The lead grew to 60-41 before Detroit’s solid stretch in the last 2 1/2 minutes of the half allowed the Pistons to close to within 65-51 at the break.

The Hornets, who began a three-game homestand, got Washington back in action after more than a week in COVID protocol and he was the first player used off the bench.