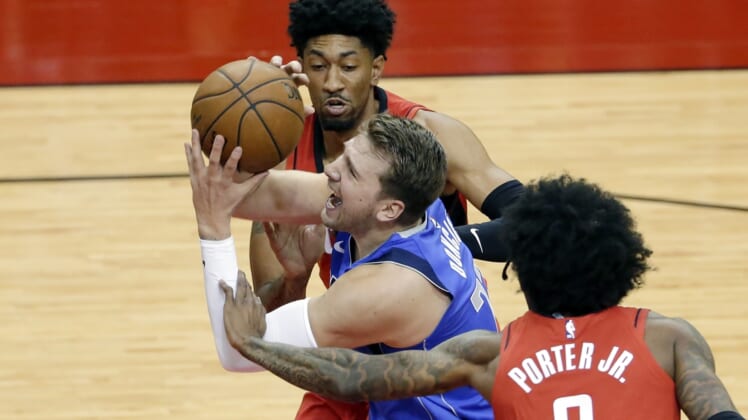 Apr 7, 2021; Houston, Texas, USA; Dallas Mavericks guard Luka Doncic (77) is fouled as he drives to the basket between during the first half of an NBA basketball game at Toyota Center. Mandatory Credit: Michael Wyke/POOL PHOTOS-USA TODAY Sports

Kelly Olynyk scored 10 points and pulled down a career-high 18 rebounds to help the Houston Rockets hold on for a 102-93 victory over the visiting Dallas Mavericks on Wednesday.

Olynyk grabbed two critical rebounds down the stretch after his three-point play gave the Rockets an 89-84 lead with 3:38 to play.

Luka Doncic drew the Mavericks even 63 seconds later before Olynyk corralled an offensive rebound that yielded a John Wall layup. When Doncic missed a 3-point attempt on the other end, Olynyk crashed the glass and Wall followed with a three-point play that lifted the Rockets to a 94-89 lead.

In what was a harbinger for things to come in the opening half, more than nine minutes elapsed in the first quarter before someone other than Doncic or Porzingis scored for the Mavericks, with Hardaway drilling a trey at the 2:26 mark. When Hardaway converted again from deep on the ensuing possession, Dallas had erased what was once a 10-point deficit and claimed a 20-19 lead.

Houston followed a strong start from Wall and Kevin Porter Jr. with Olynyk grabbing eight rebounds before making his first field goal with 3:49 left in the second quarter.

Olynyk then followed consecutive treys from Porter with a 3-pointer of his own, lifting Houston to a 47-38 lead. Dallas cut that margin to five points by the break with little production outside of Doncic, Porzingis and Hardaway. Starters Dorian Finney-Smith, Nicolo Melli and Josh Richardson combined to shoot 0-for-12 before the break, and they ended the night a combined 3-for-20 for 12 points.