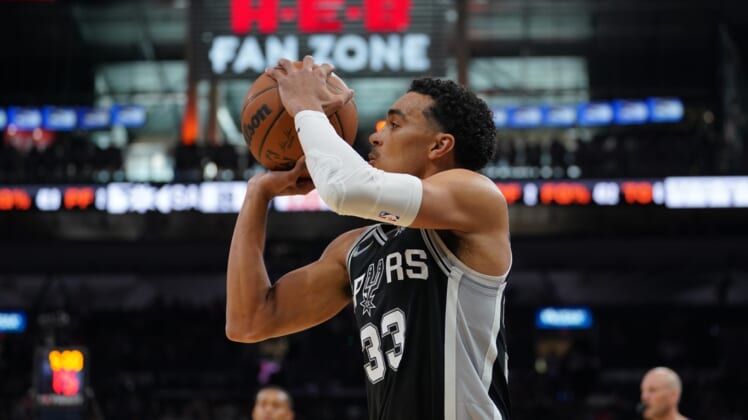 Keldon Johnson scored 28 points and Zach Collins produced his first career double-double as the San Antonio Spurs put everything together in the third quarter and ran past the visiting Portland Trail Blazers 113-92 on Sunday in the second of a two-games-in-three-days series between the teams.

The win reduced San Antonio’s magic number to clinch a spot in the play-in game to two games over the Los Angeles Lakers. The Spurs (33-45) are in 10th place in the Western Conference with four games to play and can still mathematically catch New Orleans for ninth.

San Antonio was down by eight points at halftime but turned around the game with a huge third quarter, outscoring the Trail Blazers 34-16 in the period and 10-4 over the final 2:04 while taking an 82-72 lead into the final 12 minutes.

The Spurs finished off the season-sweep of Portland, winning all four games by at least 19 points.

Zach Collins tied a career-high with 18 points and grabbed a career-best 13 rebounds for the Spurs, who have won six of their past seven games. Tre Jones added 18 points and Keita Bates-Diop had 12 for San Antonio.

Keon Johnson and Ben McLemore led the Trail Blazers (27-51), with Greg Brown III scoring 14 and Drew Eubanks racking up 13 points and 13 rebounds. Portland, which has been eliminated from postseason consideration, has dropped seven straight games and 11 of its past 12 outings.

The Trail Blazers scored 15 of the game’s first 17 points and led by as many as 13 points before San Antonio responded. The Spurs were down 23-14 with 4:07 to play in the first period then ran off the quarter’s final 12 points to take a 26-23 advantage after 12 minutes of play.

Portland jumped back in front early in the second period and held onto the lead through the end of the quarter, as McLemore recked up a three-point play and then a 3-pointer over the final 31.5 seconds to grant the Trail Blazers a 56-48 advantage at the break.

Brown III paced Portland with 14 points while Eubanks and McLemore added 11 each for the Trail Blazers before halftime. Keldon Johnson’s 17 points led all scorers in the first half.