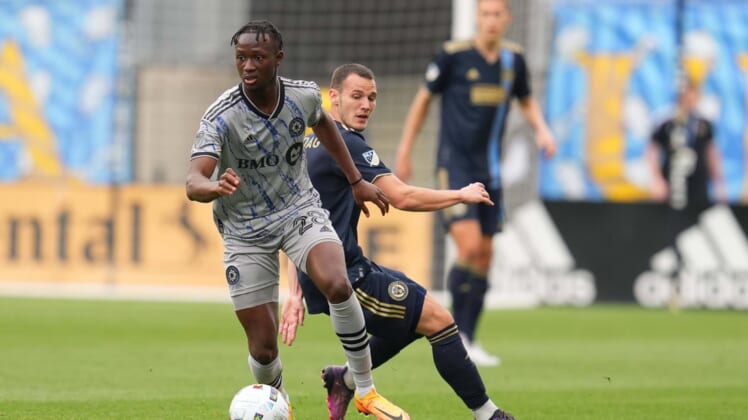 Kei Kamara scored in the 59th minute to lift visiting CF Montreal to a 1-1 draw with the Philadelphia Union on Saturday in Chester, Pa.

Alistair Johnston and Romell Quioto each notched an assist and Sebastian Breza made one save for CF Montreal (3-3-2, 11 points), who are 3-0-2 in their last five matches. They also exacted a measure of revenge after dropping a 2-1 decision to Philadelphia on March 5.

Julian Carranza converted a penalty kick in the 21st minute and Andre Blake turned aside two shots for the Union (5-1-2, 17 points), who fell to 0-1-1 following a franchise-best five-match winning streak.

Kamara made an immediate impact after entering the match as a substitute to begin the second half.

Kamara made a strong run toward the near post and provided a clean finish off a cross from Quioto. The goal was the second of the season and 132nd in the career of Kamara, who resides one shy of Jaime Moreno for fourth place all-time in MLS history.

CF Montreal pressed for the go-ahead goal in second-half stoppage time, however Kamal Miller’s header from the center of the box sailed just over the crossbar.

Philadelphia opened the scoring after Daniel Gazdag sent a through ball into the box for Carranza, who was tripped to the ground by Miller in the penalty area. Carranza patiently sized up his ensuing opportunity and deposited the ball into the right side of the net for his third goal of the season and second in as many matches.

CF Montreal midfielder Samuel Piette entered the match as a substitute in the 82nd minute. That marked his first game action since sustaining a high ankle sprain and bone bruise during Canada’s World Cup qualifying match against Honduras in January.