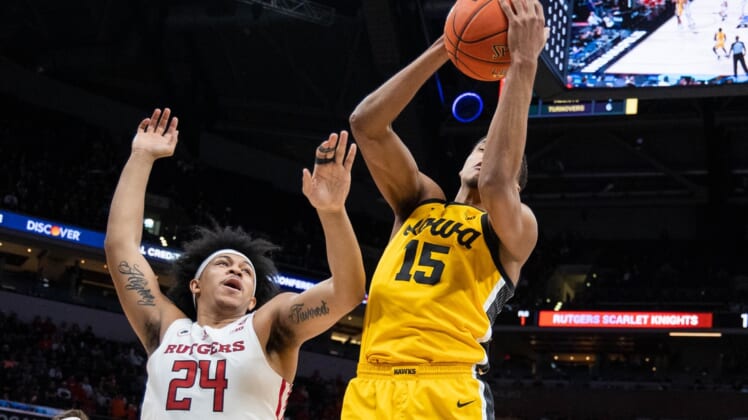 Keegan Murray scored 18 of his 26 points in the first half, and also set Iowa’s single-season scoring record, as the fifth-seeded and No. 24 Hawkeyes overcame an early double-digit deficit to win 84-74 against fourth-seeded Rutgers in Friday’s quarterfinals of the Big Ten tournament in Indianapolis.

Tony Perkins and Jordan Bohannon, who topped the 2,000 career point mark, each scored 16 for the Hawkeyes (24-9), who shot 49.1 percent after shooting 61.4 in Thursday’s 112-76 second-round win over Northwestern. Set to face No. 9 seed Indiana in Saturday’s semifinals, Iowa has won back-to-back Big Ten tournament games for the first time since 2006 — and 10 of its last 12 overall games this season.

Geo Baker had 23 points while Clifford Omoruyi scored 17 for Rutgers (18-13), which made five of its first seven shots and scored 15 of the game’s first 20 points to hold a 10-point advantage. However, Murray and the Hawkeyes woke up and held the Scarlet Knights to eight made field goals the rest of the half.

Trailing 19-13 with just under 12 minutes to go in the opening half, Iowa strung together a 9-0 run, taking the lead on Joe Toussaint’s layup and going up 22-19 on Murray’s driving dunk. The Hawkeyes used an overall 15-1 run to push their lead to eight, and led by as many as 12 in the opening half and 41-32 at the break.

Though the teams combined to make eight of the first 12 shots in the second half, Iowa hit nine of its first 14 and used a 7-0 run to take control. The Hawkeyes stretched their lead to 18 with 10:19 to play, and Murray (750) topped Luka Garza’s single-season points record of 747 from 2020-21, when he knocked down two free throws with 8:18 remaining in the game.

The Scarlet Knights got within 71-63 with 6:22 remaining on back-to-back buckets from Paul Mulcahy (13 points, nine assists) and Caleb McConnell. However, the Hawkeyes scored the next seven, highlighted by another Murray dunk off a steal and Perkins’ 3-pointer with 3:05 to play.