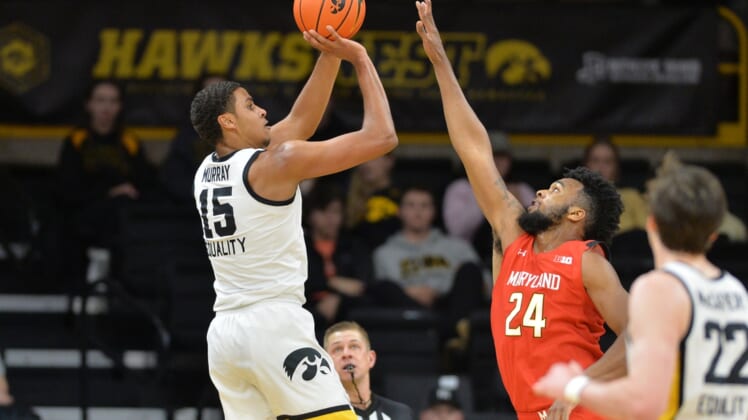 Keegan Murray, the nation’s leading scorer, got Iowa off to a hot start and then led a second-half charge, finishing with 35 points to power the Hawkeyes to an 80-75 victory over visiting Maryland on Monday night in Iowa City.

Murray made 14 of 21 shots from the floor, including 5 of 6 from beyond the arc, and pulled down eight rebounds as Iowa (11-3, 1-2 Big Ten) won its fourth straight. Filip Rebraca added 13 points and eight rebounds and Joe Toussaint scrapped for nine points, nine assists and three steals.

The Terps went up 53-51 when Wahab made a shot from the lane. But Murray answered with a 3-pointer which gave the Hawkeyes the lead for good with 12:12 left.

Iowa took command later with a nine-point spree. Reserves Ahron Ulis and Tony Perkins touched off the run with driving shots from the lane. When Murray hit a 3-pointer and Perkins followed with a pair of free throws, Iowa had a 68-58 lead with 5:22 left.

Maryland cut the deficit to four points on five occasions over the final three minutes. But Murray had all the answers, responding once with a putback and another time with two free throws.

Ayala drew Maryland as close as 77-75 with a long 3-pointer with 11 seconds left, but Connor McCaffrey and Jordan Bohannon made 3 of 4 free throws to secure the win.

Iowa made 10 of its first 15 shots, bolting to a 24-12 lead less than nine minutes into the game. But Maryland used a trapping zone defense to slow the Hawkeyes.

Answering Iowa’s hot start with an 11-point run, Maryland erased the deficit quickly. Ayala started the spree with a 3-pointer. Russell added a driving layup and a 3-pointer sandwiched around a breakaway slam dunk by Hakim Hart.