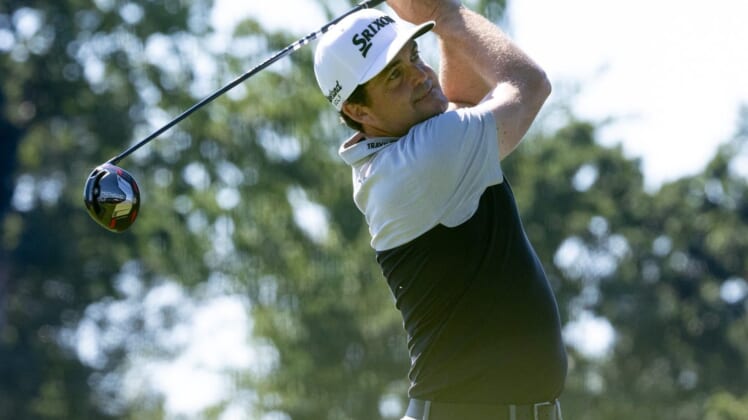 Keegan Bradley set the early pace at the second leg of the FedEx Cup Playoffs, shooting a 7-under-par 64 to grab the first-round lead at the BMW Championship on Thursday at Wilmington (Del.) Country Club.

The top 70 players in the FedEx Cup standings qualified for the BMW, and only the top 30 in points after this event will reach next week’s Tour Championship in Atlanta.

With 2,000 Cup points on offer for the BMW winner, Bradley (44th) put himself in fine position to make a late run at the title. He rolled in six birdies for a front-nine score of 29 before adding one bogey and consecutive birdies at Nos. 14-15.

Bradley sank a birdie putt from 30-plus feet out at the par-4 sixth hole before sticking his tee shot at the par-3 seventh just 3 feet from the cup for another birdie. He sent in another long birdie, nearly 39 feet from left to right, at the par-4 ninth.

The putts at Nos. 6 and 9 helped Bradley lead the field in Strokes Gained: Putting.

“My plan is I’m going to go home and see my kids no matter what on Sunday night,” said Bradley, who won the 2018 BMW at Aronimink in nearby Philadelphia. “I’m going to be home on Sunday night regardless of what happens here, and … I’d love to go to Atlanta. Obviously that’s everyone’s goal to start the year.”

Scott was paired with Bradley for the first round and trailed close behind throughout the day. He made four birdies and his only bogey on the front nine before adding birdie putts at Nos. 14, 16 and 18.

Scott, 42, tied for fifth at last week’s FedEx St. Jude Championship to move into the top 70 in the nick of time. He continued that level of play Thursday, feeding off his partner.

“I think I was drafting off (Bradley),” Scott said. “He shot 6 under on the front and was running. Sometimes it’s good to see that and you can draft off each other, but also just to know that it’s really out there. When you get off to a slower start sometimes, you can make the course harder than it really is, and Keegan made it look easy today, so I tried to take advantage of that, as well.”

Thomas, the PGA Championship winner, birdied three of his first four holes and added a 41-foot eagle putt at the par-5 14th. Lowry also eagled that hole — sinking a putt from more than 56 feet away.

“If it gets firm and fast this weekend, it could play a very championship-like golf course,” Thomas said despite Thursday’s low scores. “If the fairways continue to get firm and you drive the ball well, you can have some short clubs and make some birdies.”

Collin Morikawa, Xander Schauffele and Rookie of the Year favorite Cameron Young were part of a tie for sixth at 4-under 67, along with Russell Henley, Chez Reavie, Christiaan Bezuidenhout of South Africa and Tyrrell Hatton of England.

McIlroy challenged Bradley’s lead, making six birdies and no bogeys through 14 holes, before his round was hampered by a triple-bogey 6 at the par-3 15th. He found water left of the green with his tee shot, took a drop and left his third shot just short of the green. After missing bogey, his 3 1/2-foot putt for double bogey skidded past the right edge.

“I played much better today than I did last week, so that’s — I have to take the positives,” McIlroy said. “I still played a decent round of golf. 3 under out there this afternoon was pretty good. I’ve just got to reset tonight and forget about that swing on 15 and go again tomorrow.”

Among other notables, last week’s winner, Will Zalatoris, shot a 1-under 70 and Spanish star Jon Rahm opened with a 2-over 73. There will be no 36-hole cut.