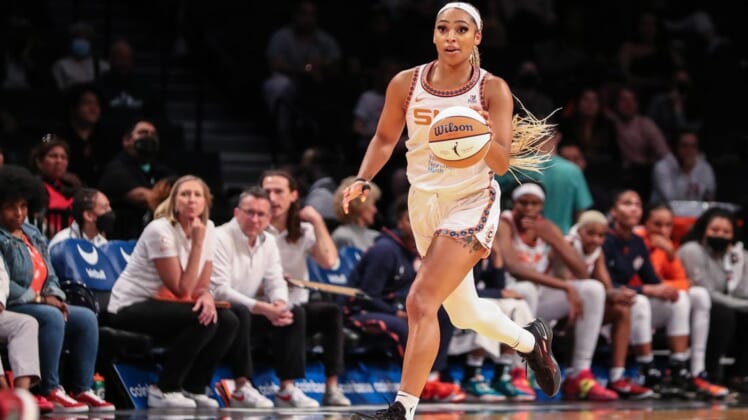 Kayla Thornton poured in 20 points to lift the Dallas Wings to an 89-79 win over host Connecticut Sun in Game 2 of the first-round series Sunday afternoon at Uncasville, Conn.

Teaira McCowan racked up 17 points and 11 rebounds off the bench for the Wings, who were in control throughout most of the game.

Game 3 is slated for Wednesday night at Dallas. Under the league’s new playoff format, the sixth-seeded Wings wouldn’t have had a postseason home game if they didn’t win at least one game in Connecticut.

The winner of Game 3 takes on the winner of the New York-Chicago series in a best-of-five semifinal round. New York and Chicago play Game 3 of their first-round set Tuesday night in New York.

Allisha Gray had 15 points and eight assists and Marina Mabrey added 14 points for Dallas, which shot 48.0 percent from the field and recorded eight steals.

The Wings won despite attempting only nine free throws. Connecticut was 19-for-21 at the foul line.

Jonquel Jones and Brionna Jones each had 20 points for the Sun, who lost despite shooting 45.2 percent from the floor. DiJonai Carrington chipped in with 13 points, but Connecticut shot just 4-for-14 on 3-pointers.

It was a shocking reversal from Game 1 when the third-seeded Sun cruised to a 93-68 victory on Thursday.

Dallas put together a 12-0 run – beginning with Thornton’s 3-point basket and ending with a jumper in a span covering less than two minutes – in the third quarter to stretch the margin to 62-37.

Connecticut trailed by 31 points early in the fourth quarter, so the comeback fell short despite a strong closing stretch.