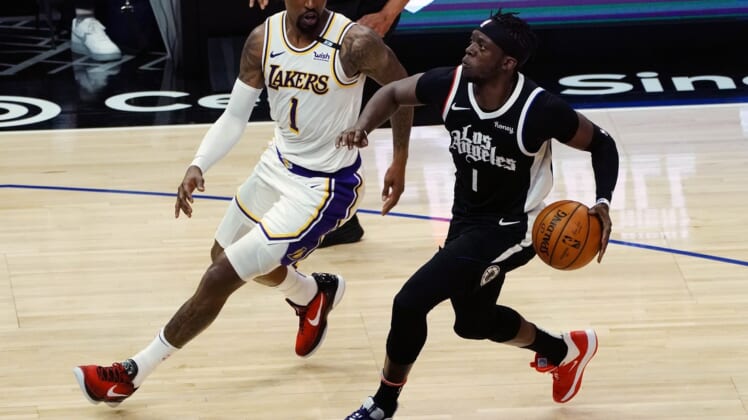 The battle of Los Angeles turned into a lopsided affair as the Clippers clobbered the Lakers 104-86 on Sunday afternoon.

The Clippers never trailed, starting the game on a 13-2 run and leading by as many as 24 points. Swingman Marcus Morris Sr. led the charge, with 17 of his game-high 22 points in the first half.

The Clippers snapped a two-game home losing streak. They also won the earlier matchup of the season between the two L.A. teams, a 116-109 decision in the season opener on Dec. 22.

The Clippers played suffocating defense against the shorthanded Lakers, holding them to 40.0 percent shooting from the field. The Lakers finished just 7 for 23 (30.4 percent) from beyond the arc.

The Clippers took a 53-38 lead into the locker room at the half. The Lakers’ point total was their lowest in the first half this season.

Point guard Rajon Rando took the floor for the first time since joining the Clippers in a trade with the Atlanta Hawks last week. Rondo has been working his way back from right abductor soreness.

The Clippers are in the middle of a nine-game homestand; they are 3-2 so far at Staples Center during that stretch.

The Lakers continue to struggle without LeBron James and Anthony Davis. James has been out two weeks while nursing a right, high-ankle sprain sustained on March 20 against the Hawks. The Lakers are 3-6 in that stretch.

Davis has missed a total of 27 games this season, the last 22 due to a right calf strain. The two superstars remain out indefinitely.