Los Angeles Clippers star Kawhi Leonard is set to hit free agency after declining his player option for the 2021-22 season.

While rumors have persisted that Leonard will re-sign with Los Angeles, that no longer seems to be a foregone conclusion. The backdrop here being the torn ACL he suffered in this year’s NBA Playoffs and the unlikelihood that Leonard will suit up at any point during the 2021-22 campaign.

From a logistical perspective, this might change the type of market Leonard receives. He’s still going to get a max contract. It’s now all about teams looking forward to the 2022-23 season. Below, we check in on five ideal destinations for Kawhi Leonard during NBA free agency.

Michael Jordan adds Kawhi Leonard to the mix in Charlotte

Hear us out for a second. Charlotte is expected to have roughly $20 million to spend in free agency. Jordan and Co. could very well decide to use that on Leonard knowing full well that he won’t be suiting up this coming season. It almost makes too much sense with LaMelo Ball looking every bit the part of a star and following the selection in James Bouknight in the 2021 NBA Draft.

Now, why would Leonard do this? That’s the million-dollar question. For us, it’s rather simple. He can come back in 2022-23 while adding to a core group of Ball, Bouknight, Gordon Hayward and either Miles Bridges or P.J. Washington. In terms of the finances, perhaps Charlotte offers the Clippers one of Bridges or Washington as well as Terry Rozier to make this work. Los Angeles was linked to Rozier leading up to the March 25 NBA trade deadline.

Flush with two All-Stars in that of center Nikola Vucevic and wing Zach LaVine, the Bulls are looking to add another star player to the mix. They’ve already been linked to Lonzo Ball. But why not think about the long game here? Chicago has the assets to make a sign-and-trade with the Clippers for Leonard. It also has the talent to compete for a playoff spot without him in the mix next season.

The idea here would be to send cap fillers such as Thaddeus Young and Tomas Satoransky to the Clippers a long with a youngster in Coby White to make it work. Chicago would then have the assets to pull off a sign-and-trade with the New Orleans Pelicans for Lonzo Ball. Stranger things have happened.

Flush with a projected $52.6 million in free agency, New York can afford to sign Leonard outright. It’s one of the reasons that the surprising Knicks have been linked to big-name players heading into NBA free agency. The question here becomes whether front office head Leon Rose can create more wriggle room to add another max-contract player.

Right now, a team comprised of Leonard, Julius Randle and R.J. Barrett for the 2022-23 season might not seem to be a championship contender. Of course, New York could very well decide to keep its remaining cap room to hit 2022 free agency hard when as many as 10 future Hall of Famers are set to see their contracts expire. But that’s ways down the road.

The interesting dynamic here is that Dallas could actually have the financial resources to sign Leonard outright if the two-time NBA Finals MVP opts to leave the Clippers. It is projected to have $33.5 Million in cap room. Moving the expiring contract of Dwight Powell and draft picks to a team with cap room would give the Mavericks enough to get this done. 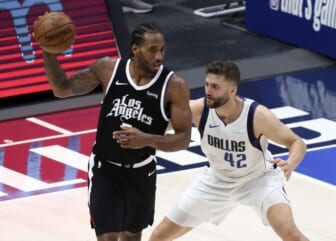 New Dallas general manager Nico Harrison is certainly thinking about the long game here. He also has great relationships with star players dating back to his days as a Nike executive. With Luka Doncic having not hit his prime yet, Dallas could to push its championship aspirations to 2022-23. If so, it could then potentially add another star by shipping off the bloated contract of an unhappy Kristaps Porzingis next summer. Just some food for thought.

Now that it’s almost a certainty Chris Paul will return to the defending Western Conference champions, up-and-coming general manager James Jones might look to pull off a stunning move for the future. While the finances would be a bit difficult in a sign-and-trade with the Clippers, Jones and Co. could get it done.

A premise of a deal would be youngsters Mikal Bridges and Jalen Smith heading to Los Angeles with two cap fillers in that of Jae Crowder and Dario Saric. Phoenix would then offer up multiple future first-round picks to make this worth the Clippers’ while. If the Suns are then able to add ring chasers in free agency, moving off these depth players wouldn’t impact them too much in 2021-22 before the core three of Paul, Leonard and Devin Booker look to dominate the following season.