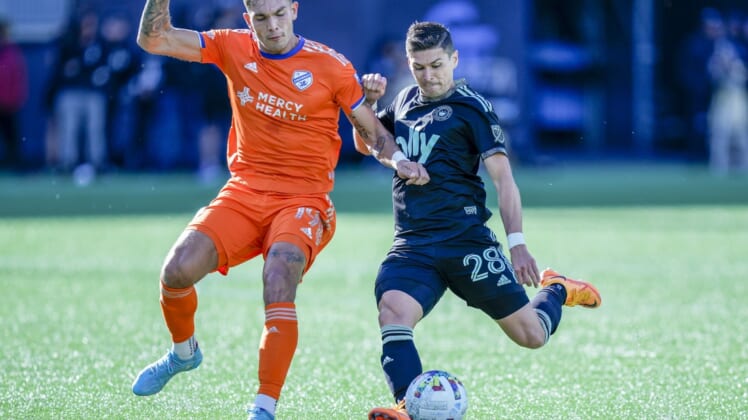 Karol Swiderski scored two goals with a tally in each half as Charlotte FC defeated visiting FC Cincinnati 2-0 on Saturday.

A week after the Charlotte FC franchise secured its first victory, it has another first-time accomplishment. Now, it’s a winning streak of two games.

Kristijan Kahlina made five saves for the shutout for Charlotte FC (2-3-0, 6 points).

FC Cincinnati (2-3-0, 6 points) was aiming for its third consecutive win, but it fell into an early hole and couldn’t respond. So the first three-game winning streak in club history didn’t happen.

Instead, Charlotte FC controlled possession for much of the first half.

It paid off right away when Swiderski scored in the sixth minute off an assist from Bend Bender.

That came after a strong sequence in transition for Charlotte FC. Bender’s pass from the left side went in front of the goal mouth and Swiderski was there to convert before FC Cincinnati goalkeeper Alec Kann could get back in position. That right-footed shot came from the right of the 6-yard box.

The next goal came in the 55th minute. Swiderski also put this ball into the top left, though he used a left-footed delivery on a free kick with the ball going just above Kann’s outstretched arms. Swiderski has two goals in each of Charlotte FC’s victories.

FC Cincinnati’s Brandon Vazquez, who shared the MLS lead with four goals this season entering the weekend, was stifled for much of the game. The team finally got some traction in the second half with better possession and the team finished with three corner kicks.

FC Cincinnati was without defender Ronald Matarrita, who was called up for an assignment for the Costa Rican national’s World Cup qualifier. He had two assists a week earlier.