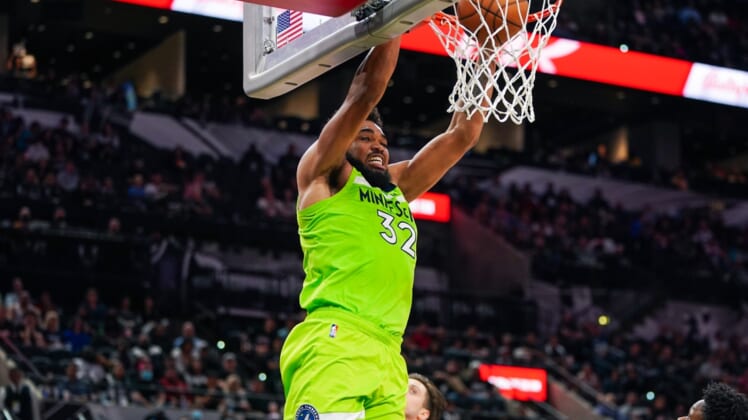 The Lakers have fallen to 29-39, losing 14 of their past 19 games, while Minnesota has won eight of its past nine to move 1 1/2 games behind the Denver Nuggets for sixth place in the Western Conference playoff chase.

Wolves center Karl-Anthony Towns is coming off the best performance of his career, scoring a franchise-record 60 points in Monday’s 149-139 win over the San Antonio Spurs.

“I feel like anytime I touch the ball, I’m unstoppable,” Towns said. “I don’t think anyone in this league can guard me one-on-one. This is just a night where I shot a lot more and I made a lot more, too.”

Minnesota needed a strong performance from its big man with forwards Naz Reid (back spasms) and Jarred Vanderbilt (left thigh contusion) sidelined. Both are listed as day-to-day.

The Wolves have won two of this season’s first three meetings against the Lakers, whose defense has disappeared in recent weeks. Los Angeles has allowed 100 points in 16 straight games and gone 4-12 in that span.

The Lakers are hoping to bounce back following two ugly losses to the Phoenix Suns and Toronto Raptors. Los Angeles fell behind 33-12 after the first quarter of Monday’s 114-103 loss to the Raptors.

LeBron James led a fourth-quarter charge and finished with 30 points, but the Lakers were never able to recover from the early deficit.

Slow starts have become the norm for the Lakers, who have trailed by a total of 47 points through the combined first quarters in their past two games.

“There’s just too many times when we get into big deficits,” Los Angeles coach Frank Vogel said. “It takes its toll on your individual psyche and the psyche of your group. You’re constantly aiming to try to push your guys to be better and coaching them hard but also trying to keep them lifted, because it definitely takes its toll on your psyche.

“Just the amount of times when we’re down 20-plus points this season, it’s been very difficult.”

James, who is averaging 34.6 points in seven games this month, was a game-time decision on Monday because of soreness in his left knee but ended up playing 40 minutes.

One bright spot in Monday’s loss was the play of 6-foot-9 forward Wenyen Gabriel, who grabbed nine rebounds in 19 minutes. Vogel indicated the third-year pro has made a case for increased playing time.

“I like the energy that Wenyen brings to our team,” Vogel said. “He plays super hard and has a pure attitude and is long and athletic. We need that type of length and athleticism at the forward position.”

The Lakers could use Gabriel’s height to help contain Towns, whose 60-point performance against San Antonio included 32 points in the third quarter.

Minnesota also received a boost from point guard D’Angelo Russell, who broke out of a mini-scoring slump with 19 points against the Spurs. Guard Patrick Beverley returned after missing one game due to an ear injury and matched his season high with 20 points.