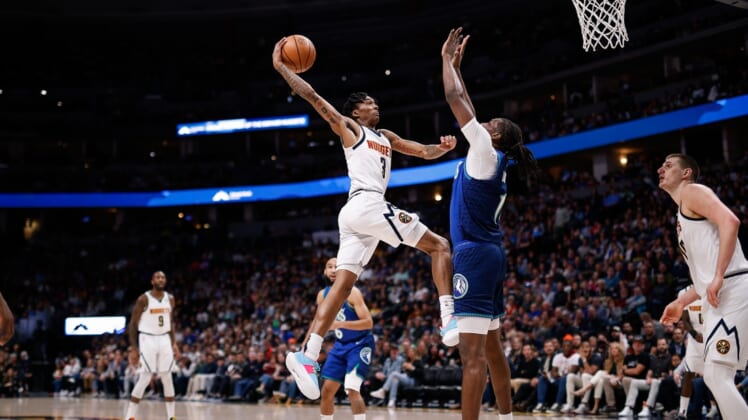 Anthony Edwards had 18 points, Taurean Prince scored 16 and Malik Beasley finished with 15 points in his return to the lineup after missing two games with an ankle injury. The Timberwolves (44-34) won three of four games from the Nuggets and kept alive their chances of grabbing a top-six seed in the Western Conference.

Both teams shot well in the first quarter, with Towns and Russell leading the way for Minnesota. Towns made all six of his shots and scored 16 in the period while Russell had 12 points on 4-for-4 shooting to give the Timberwolves a 40-35 lead.

Minnesota went ahead 51-39 early in the second quarter before the Nuggets rallied. Three dunks by Gordon and 12 points from Jokic brought Denver within 66-65 late in the period, but the Timberwolves scored the final four points to lead 70-65 at halftime.

Minnesota opened the third on a 9-2 run to lead by 12 but again the Nuggets answered. Morris hit a 3-pointer, Jokic made a technical free throw and Will Barton another 3-pointer in a 9-0 run, and the Nuggets took their first lead since early in the game when Green’s two free throws made it 87-86.

The Timberwolves rallied to lead 98-94 heading into the fourth.

Minnesota quickly pushed the lead to 105-96 in the first two minutes of the final quarter and Jordan McLaughlin’s 3-pointer made it 111-100 with 8:51 left. Denver had a chance to cut it to six but two turnovers led to layups on the other end and a 115-102 Timberwolves lead with 7:57 left.

The Nuggets scored five straight points but 3-pointers from Edwards and Beasley made it 121-107. Denver rallied to get within 133-130 with 19 seconds left but Minnesota held on.