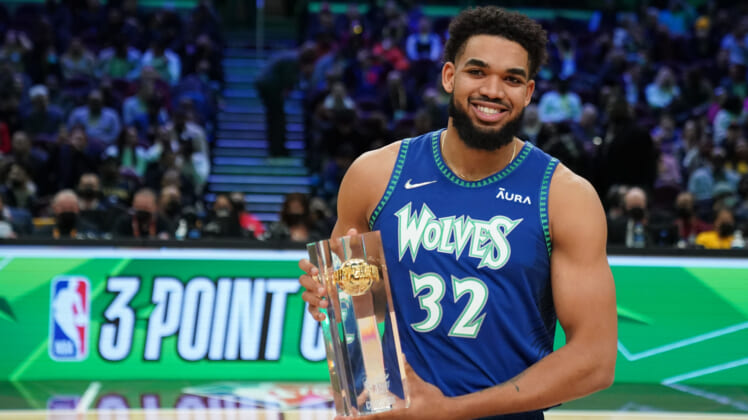 For the better part of the last two decades, the Minnesota Timberwolves have been an absolute joke. But not anymore. Karl-Anthony Towns, D’Angelo Russell, Anthony Edwards, Pat Beverley and coach Chris Finch have made sure of it. This wolf pack means business and they’re ready to let the whole world hear their howl.

Basketball world was dismissive on Karl-Anthony Towns before Finchy

We heard it every year whether it was the offseason or when the NBA trade deadline would approach, teams had their eye on the best shooting big in basketball. All the big markets wanted to bring Karl-Anthony Towns aboard. And seeing his unique skillset, why wouldn’t they?

But it wasn’t until Chris Finch got his first full season as the head coach of the Timperpups that we’ve seen KAT truly flourish, on both ends of the court. As the unquestioned leader of a playoff team for the first time in his career, the Timberwolves are 42-30, in reaching distance of the 6th, and possibly, the 5th seed in the Western Conference. It’s been 18 years since the Wolves have been anything higher than the 8th seed, which they accomplished with Jimmy Butler in 2018.

Across 113 games, Finch already has the franchise’s second-best winning percentage in their 33-year history.

Ever since Finch was hired, it’s like the Wolves have a coach that the players respond to, but more importantly, they have a rotation full of shooters who are willing to hustle and play defense.

From the addition of Patrick Beverley who helps set the tone both mentally and physically, to Jarred Vanderbilt being a rebounding hog, with his nonstop V8 motor, the Wolves have found a starting five that works well together.

Of the lineups to have played at least 15 games together, the Wolves’ starting five has the second-best +/- in the NBA. Not only does the starting five play cohesively, Finch’s bench rotation leads the league, scoring 46.3 points per game since January 28th.

The Timberwolves have the best record in the NBA since the All-Star break? That’s pretty good. Finch is raising eyebrows across the league and you can bet he’ll be a Coach of the Year candidate. He’s earned it.

Minnesota Timberwolves have best offense in the NBA, led by Karl-Anthony Towns

As you may have seen in the graphic above the Timberwolves lead the NBA in scoring, with 115.5 points per game. They’ve also hit more three-point shots than any other basketball team during the 2021-22 season. This is a fun team all around and as Anthony Edwards likes to remind us, they have swag, they have yet to learn just how good they can be.

As coach Finch stressed ever since he joined the team in 2020 mid-season amidst some controversy, the offense runs through Karl-Anthony Towns. That’s made clear by him leading the team in points per game, three-point percentage, effective field goal percentage, everything.

Here’s the thing, KAT’s numbers are the same as they’ve always been. None of his stats, aside from steals per game, are at a career-high. He’s been a consistent presence all along, but now he’s only missed eight games all season.

Somehow, despite playing all 82 games for the first three seasons of his career, a narrative developed that KAT had durability issues. Those concerns seem to have disappeared almost as soon as they sprung up.

In 2016, in the general manager survey done at the beginning of each year, 48.6% of the executives polled said if they could build a franchise around one player, they’d choose KAT. Yet the past two seasons, his stock had slipped, and was left off the survey altogether. We’ll be curious to see those same polls once again at the start of next season, but chances are, the Wolves will have one, if not two of their players on that list, with KAT and Ant.

From the 60-point game that set the new franchise record, which he previously held with 56 points, to winning the 3-point contest during All-Star Weekend, KAT has been on a tear all season.

As if there was any question before, Towns is an NBA superstar. Already in the MVP conversation, if he can continue for another 10 seasons at anything near his current effort, there’s no way Towns doesn’t end up in the NBA’s Naismith Memorial Basketball Hall-of-Fame.

A-Rod has already joined the club, but there’s still room on the bandwagon in the Twin Cities. Get prepared to tune into what’s an extremely exciting basketball team come playoff time, and don’t be shocked when they make some noise.

After all, this isn’t the same Timberwolves team hoping the lottery balls bounce their way. Instead, they have an alpha wolf who’s ready to show the world what he can do when supported by what appears to be his best friends on the court. Don’t say you weren’t warned.