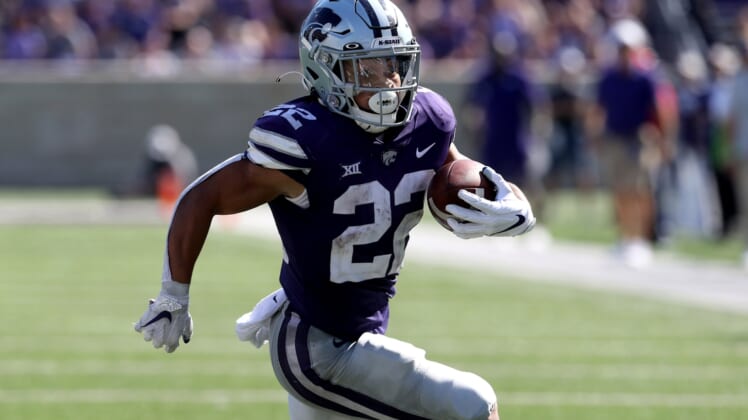 For the first three weeks of the season, No. 25 Kansas State was firmly under the radar. But now freshly ranked after three straight wins, the Wildcats head to Stillwater, Okla., for their first true road game and first Big 12 game of the season on Saturday knowing they won’t catch anybody by surprise.

The Wildcats have passed each test to date, opening with a neutral-site victory over Stanford, holding on to defeat FCS opponent Southern Illinois after losing starting quarterback Skylar Thompson in the first quarter and finally defeating Nevada as a home underdog.

But both coaches know their teams will have to pick it up a notch.

“This conference can run backups out there and still be effective,” Oklahoma State coach Mike Gundy said. “Each week it’s going to be more difficult to be effective when we rush the football. That’s why it’s so important that we must find a way to do it with where we’re at running the football.”

The fact that Oklahoma State (3-0) is focused on running the football may surprise some. For years under Gundy, the Cowboys have been a prolific passing offense. But even with a third-year starter at quarterback in Spencer Sanders, they’re run-first. They will be challenged by a stingy Wildcats’ run defense.

K-State’s 1.9 yards per rush allowed is an impressive number. But even Wildcats coach Chris Klieman might add an asterisk to the figure.

“We played really well against Stanford and Southern Illinois,” Klieman said. “Nevada was a throwing team. We tried to make them one-dimensional and we were able to do that. But that wasn’t their bread and butter. They wanted to get the ball in their quarterback’s hands and have him spread it around.

“We’re running to the football well. But (Oklahoma State) is an exceptional rushing team. They can beat you in a lot of ways, but they rush the ball effectively. We’re not going to be able to stop them. We just have to limit some of their explosive plays.”

“We’re in a similar situation we were in 2019,” he said. “We started off 3-0 in the (nonconference season) and we had to go on the road to Oklahoma State. We didn’t fare well. They got after us pretty well. It’s a tough environment to play in Stillwater. Our guys know that.

“We’ve got to continue to get better in a lot of areas. Special teams are one of them. We can’t have penalties on special teams.”

Oklahoma State has a long history of successful running backs, including Chuba Hubbard, who led the Cowboys the last few years. Jaylen Warren, the reigning Big 12 Offensive Player of the Week, is averaging 5.1 yards per carry and 88.0 yards per game.

And don’t sleep on Sanders.

“Spencer is a good runner, and he’s explosive and dangerous when he runs, so he needs to run the ball,” Gundy said. “We don’t ever want to get him hit. We try to minimize the blow. There is just times he has to do that based on the scheme we see. He has to be able to rush the ball.”

The Cowboys won their first three games by a total of 13 points. Warren rushed for a career-best 218 yards in last Saturday’s 21-20 win at Boise State.