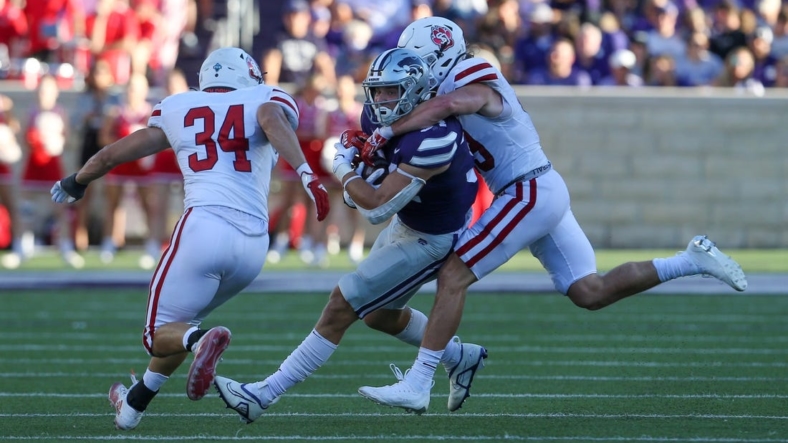 Malik Knowles raced 75 yards on a jet sweep for a touchdown on the first play from scrimmage and the Kansas State Wildcats dominated the South Dakota Coyotes 34-0 in Manhattan, Kan., in the season-opener for both teams.

It was the third time in eight seasons the two clubs have faced each other to start the season. It was Kansas State’s first shutout in almost three years.

Kansas State, expected to be more up-tempo this season, didn’t have to show a lot on offense. Quarterback Adrian Martinez, a transfer from Nebraska, was 11-of-15 for 53 yards. He also rushed for 39 and a touchdown.

Running back Deuce Vaughn finished with 126 yards on 18 carries for his seventh straight 100-yard game, even though he barely played in the second half.

The stifling defense held South Dakota quarterback Carson Camp 18-of-34 passing for 139 yards. South Dakota was 5-of-16 on third down and 0-for-4 on fourth down.

Even without the first-play strike, the Wildcats were in control from the start. After the second straight three-and-out by South Dakota, Seth Porter blocked a South Dakota punt and Desmond Purnell returned it for a touchdown to put the Wildcats up 14-0.

Kansas State then picked off a South Dakota pass at their 37. Five plays later, Vaughn took it in from 39 yards out to give the Wildcats a 20-0 before the end of the first quarter.

The Wildcats outgained the Coyotes 183-46 in the first quarter. The Wildcats had 146 of those yards on the ground.

Martinez scored his first Wildcats touchdown on a 6-yard run with 5:49 left in the second quarter.

South Dakota had just one first down before picking up three on their final drive before halftime.

DJ Giddens scored the Wildcats’ fourth rushing touchdown from 12 yards out midway through the third quarter for the game’s final points.