Kansas State looks to stun No. 6 Oklahoma for third year in row 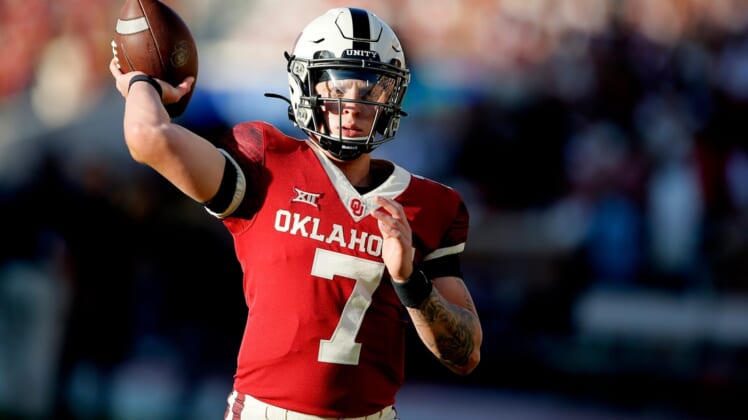 Kansas State spent one week in the Top 25 rankings, but a loss at Oklahoma State caused the Wildcats to fall right back out.

Now with No. 6 Oklahoma coming to town Saturday, K-State will have a chance to make another positive impression.

The Wildcats (3-1, 0-1 Big 12) certainly won’t be intimidated by the nation’s sixth-ranked team – they have knocked off higher-ranked OU teams in each of the past two seasons.

K-State entered this season with three wins before dropping a 31-20 decision to Oklahoma State on Saturday. Running back Deuce Vaughn entered the OSU game with five straight 100-yard games, but after the Wildcats fell behind by three touchdowns in the first half, Vaughn became a non-factor and managed just 22 yards on 13 carries.

“They said they were going to stop Deuce and make us beat them throwing the ball,” coach Chris Klieman said Tuesday. “When we were down as much as we were, that’s not a good position for us to be in.”

Oklahoma (4-0, 1-0) hasn’t lost this season, but, with one exception, the Sooners haven’t been as dominating as many expected. Three of the four victories have been by a touchdown or less.

In their last game, they did not hold a lead against West Virginia until the game-winning field goal on the final play of a 16-13 Sooners victory.

“It ain’t easy to go down there — backed up on our own 7 and you have to drive down there to win the game,” head coach Lincoln Riley said. “Not only did we do it, but we did a great job of executing and turning it into a 4-minute situation, leaving them no time to win the game. That’s some of our best ball right there at the end.”

Offense has been the trademark of Oklahoma football under Riley. But so far this season, take away the 76 points they hung on Western Carolina, and their 26.3 points per game would rank in the mid-80s in college football.

Quarterback Spencer Rattler is completing 74.1 percent of his passes for just over 250 yards per game, but his stats aren’t gaudy like his three predecessors, two of whom won the Heisman Trophy. He needs a big game to keep his fading Heisman hopes alive.

In his third season at K-State, Klieman hasn’t lost to the Sooners. The Wildcats built a big lead over the fifth-ranked Sooners in 2019 then held on for a 48-41 win in Manhattan. In 2020, OU was ranked third and led 35-14 late in the third quarter in Norman, but the Wildcats scored the last 24 points in the game’s last 17 minutes to claim a 38-35 victory.

The Wildcats have been hurt since early in the second game by the loss of their starting quarterback, Skylar Thompson. It looked to be a season-ending injury when Thompson went down in a heap without being touched. There’s a slim chance Thompson could play against Oklahoma, though it’s not likely. Klieman says the final decision would be made late in the week.

Klieman said Will Howard and Jaren Lewis would split quarterbacking duties again. Howard had to leave the OSU game because of an undisclosed injury but is expected to be ready for Saturday.