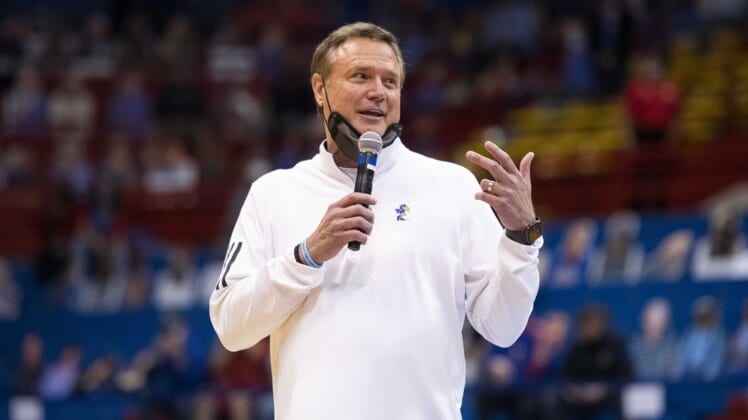 Self’s current contract was set to expire in March 2022. It will be replaced with a five-year rolling agreement that automatically adds one year at the end of each season for the rest of Self’s career.

“I want to extend my sincere appreciation to Chancellor (Doug) Girod, (interim director of athletics) Kurt Watson, and the rest of the leadership at KU for their belief and faith in me to provide this lifetime contract,” Self said. “Every day, I am reminded just how fortunate I am to lead this storied program and there truly is no place else I would rather be. As we continue to work through the challenges facing our program, we look forward to moving ahead and focusing on our bright future.

“I would also like to express my gratitude to our alumni and donors, as well as the best fans and students in the nation, that have supported my family and me for the past 18 seasons. I’m excited to remain your basketball coach and compete for many championships in the future.”

Self, 58, guided Kansas to a 21-9 record in 2020-21. The Jayhawks finished second in the Big 12 during the regular season before being forced to withdraw from the conference tournament following a positive COVID-19 test.

Kansas defeated Eastern Washington in the first round of the NCAA Tournament before dropping an 85-51 decision to Southern California in the second round on March 22.

“For almost 20 years, Coach Self has embodied the spirit and tradition of the University of Kansas, leading our men’s basketball program to a national championship, 15 Big 12 titles and 17 NCAA Tournament appearances,” Girod said. “We believe in Coach Self and we believe in the future of our program under his leadership, and we are thrilled that he will continue to be a Jayhawk for the rest of his coaching career.”