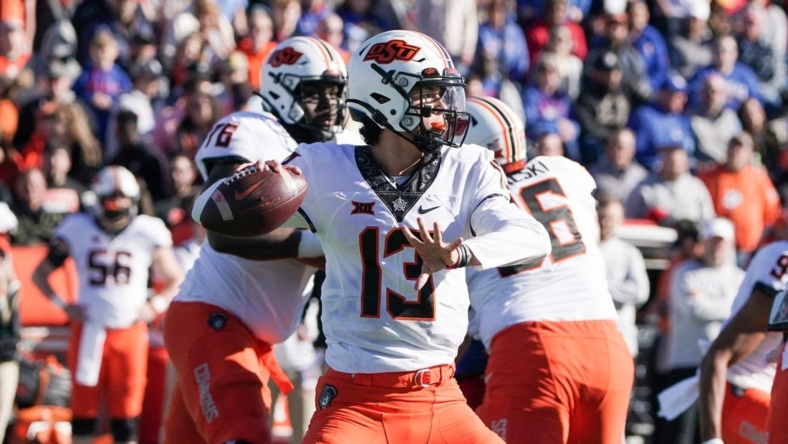 Devin Neal ran for 224 yards and a touchdown as Kansas rolled past visiting No.18 Oklahoma State 37-16 Saturday afternoon in a key Big 12 Conference game in Lawrence, Kansas.

Kansas quarterback Jason Bean passed for two scores and ran 73 yards for another.

The win snapped a three-game losing streak for Kansas and assured that the Jayhawks (6-3, 3-3 Big 12) would play in a bowl for the first time since 2008.

The Cowboys (6-3, 3-3 Big 12) were without starting quarterback Spencer Sanders, who was ruled out with an injury hours before the game. Garret Rangel got his first career start and passed for 304 yards and two touchdowns, but also uncorked three interceptions in the loss.

Oklahoma State has dropped two straight games and three of its past four.

The Jayhawks scored first on Neal’s 31-yard touchdown run at the 11:21 mark of the opening quarter. Jacob Borcila kicked a 21-yard field goal with nine seconds remaining in the first quarter to expand the Kansas lead to 10-0.

Oklahoma State finally got on track early in the second quarter, moving 75 yards in 15 plays to Rangel’s 8-yard scoring pass to Stephon Johnson Jr. with 9:59 to play. But the Jayhawks immediately responded as Bean dashed through the defense for his long scoring run that sent Kansas to a 17-7 advantage with 9:10 to play in the quarter.

The Jayhawks weren’t done in the half, moving 87 yards in only seven plays to an 8-yard Bean-to-Lawrence Arnold touchdown pass 22 seconds before halftime to carry a 24-7 lead into intermission. Neal ran for 146 yards and a score before halftime.

Kansas built on its advantage with a touchdown drive on its opening possession of the third quarter which covered 75 yards, chewed up almost eight minutes and ended with Bean’s 8-yard scoring toss to Jared Casey.

Oklahoma State’s Tanner Brown booted a 35-yard FG that was later countered by a 20-yarder by Borcila. The Cowboys cut into their deficit with a 25-yard touchdown pass from Rangel to Jaden Nixon that was soon answered by Borcila’s third field goal.