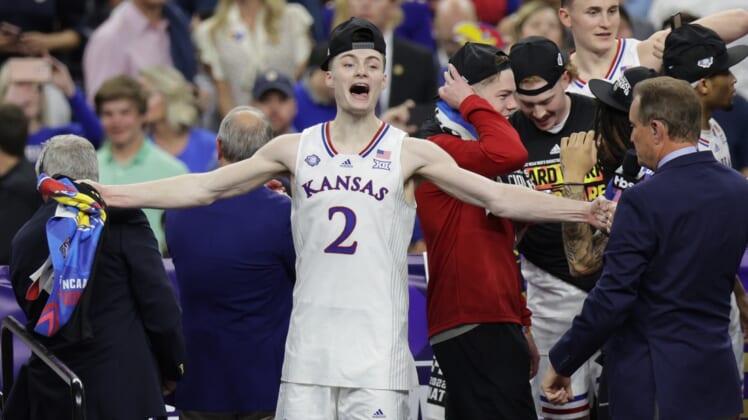 Kansas junior guard Christian Braun announced Sunday that he is entering the NBA draft but will retain his college eligibility in case he elects to return to school.

Braun averaged 14.1 points, 6.5 rebounds and 2.8 assists in 40 games while helping the Jayhawks win the national title.

Braun made his announcement on social media.

“Just a kid from Kansas. That’s where I started this journey. Now, three years later I’m a National Champion,” Braun wrote. “None of that would be possible though, without the best teammates, coaches, and fans in the world. To say I love Kansas would be an understatement. This place is beyond special. No matter where life or basketball takes me, I will be a Jayhawk forever and represent this program to the best of my abilities.

“With that being said, after talking with my coaches and family, I would like to declare for the 2022 NBA draft.”

Braun contributed 12 points and 12 rebounds in the 72-69 title-game victory over North Carolina. He scored in double figures in five of the Jayhawks’ six NCAA Tournament contests.

“We all believe Christian is a first-round talent,” Kansas coach Bill Self said in a news release. “We think he has a shot to go high in the draft and we are very hopeful that he does. If he doesn’t get the feedback, he wants to keep his amateur eligibility available to him and keep his options open to return to school.

“I honestly believe if Christian performs like he is capable of performing, he’s a guy who is talented enough that the feedback he’ll receive is one that he can be a high draft pick and then it will be Christian’s and his family’s decision to do whatever they want to do after that.”