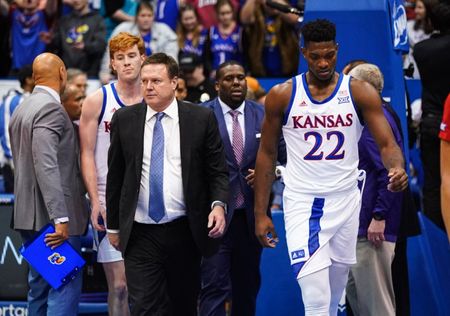 Kansas senior forward Silvio De Sousa opted out of the 2020-21 college basketball season on Friday to focus on “some personal issues.”

De Sousa is best known for his role in a brawl during the closing seconds of a game against Kansas State on Jan. 21. His actions in the melee earned him a 12-game suspension from the Big 12 Conference.

“I have a lot of things weighing on my mind and need to address these by taking time for myself and stepping away from basketball,” De Sousa wrote on Twitter. “I do not know what my next plan will be right now, but I will decide that when the time is right.

“This was not an easy decision to leave the basketball program, but it’s the best thing for me to do right now.”

“Today, Silvio informed me he was going to opt out of the 2020-21 season and focus on matters in his personal life,” Self said in a statement. “Knowing Silvio, it was clear he had been distracted and not fully focused during workouts as of late. After he and I sat down and talked about that, it was clear this was the best decision for him, and Kansas basketball, to leave the program. At some point in the future, Silvio will decide what his next steps will be and where that will take him.

“Silvio has worked very hard during his time here and we have stood by him throughout, but we fully understand his reasoning to take time away from basketball. We support his decision and wish him nothing but success moving forward.”

With about five seconds left in the game on Jan. 21, De Sousa was dribbling to run out the clock when Kansas State’s DaJuan Gordon stole the ball and headed for a layup. De Sousa caught up with him and blocked the shot, sending Gordon to the floor. De Sousa approached Gordon and stared down at him, prompting the fight that brought players from both teams off the bench.

During the melee, De Sousa threw punches and picked up a stool, though a Kansas assistant pulled the stool out of his hands before the forward could do anything with it.

De Sousa averaged 2.6 points and 2.8 rebounds in 18 games during his junior season.

Even before the fight, De Sousa’s Jayhawks career was mired in controversy. He played on Kansas’ Final Four team in 2017-18, averaging four points and 3.7 rebounds, but then missed the entire 2018-19 season when he was one of the central figures in the FBI’s investigation of corruption in college basketball.

The NCAA officially announced Feb. 1, 2019, that De Sousa was ineligible for the 2018-19 and 2019-20 seasons “because his guardian received payment from a university booster and agent and agreed to receive additional funds from the same person.” Kansas won an appeal regarding his eligibility in May 2019, allowing De Sousa to play last season.