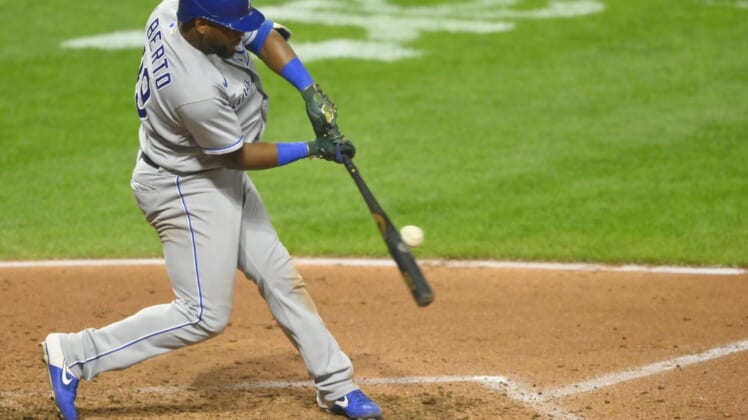 Hunter Dozier capped a productive Monday by driving in a run as the visiting Kansas City Royals completed a sweep of a doubleheader with a 4-2 victory over the Cleveland Indians.

Dozier’s sacrifice fly in the first inning gave the Royals an early 2-0 lead. He also belted a two-run homer and added an RBI single in Kansas City’s 7-2 victory over Cleveland in the first game of the twin bill.

Former Indians player Carlos Santana worked a bases-loaded walk in the first inning of the nightcap. Hanser Alberto had an RBI single and joined Nicky Lopez by each recording two of the six hits for the Royals (69-82).

Domingo Tapia (3-0) struck out four of the five batters he faced before Jake Brentz fanned two batters in a scoreless fifth inning. Josh Staumont bridged the gap to Scott Barlow, who worked around Bobby Bradley’s 14th homer of the season to secure his 14th save of the season.

Andres Gimenez belted a solo homer in the third inning for the Indians (73-76), who had won 11 straight games against Kansas City prior to Monday’s action.

Lopez ripped a one-out double in the first inning to extend his career-high, on-base streak to 30 games before the next two batters walked to load the bases. Santana worked a free pass off Nick Wittgren (2-8) before Dozier’s sacrifice fly plated Salvador Perez to give Kansas City a 2-0 lead.

Gimenez halved the deficit with one out in the third inning after depositing a 2-2 slider from Joel Payamps over the wall in right field. The homer was Gimenez’s fourth of the season and second in four games.

Cleveland’s hard-throwing left-hander Anthony Gose made his major-league pitching debut in the fourth inning after last appearing in a big league game as a center fielder for the Detroit Tigers on May 15, 2016.

Gose, who was promoted from Triple-A Columbus prior to Monday’s doubleheader, allowed a run after Kyle Isbel scored on Sebastian Rivero’s groundout to second base.

Isbel ripped a two-out double in the sixth inning and came around to score on Alberto’s single to right field.

Payamps started for the Royals, going 2 1/3 innings and allowing one run and two hits. He struck out two without a walk. Wittgren recorded only two outs after starting for Cleveland, giving up two runs, one hit and three walks without a strikeout.