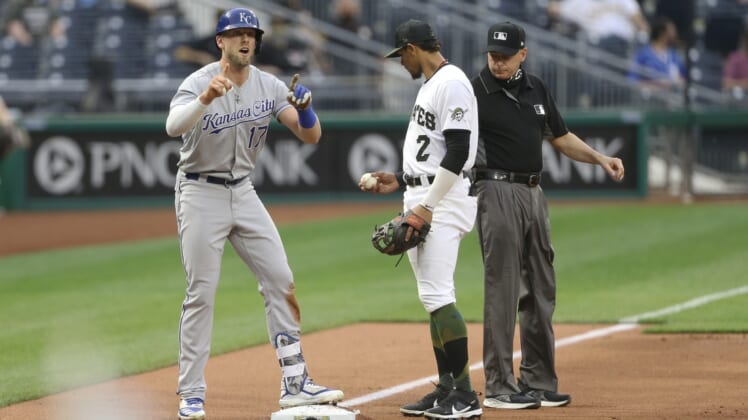 Jorge Soler was 3-for-5 and drove in three runs with two doubles and a single Wednesday as the visiting Kansas City Royals topped the Pittsburgh Pirates 9-6 for a split of their two-game series.

Hunter Dozier added a two-run triple, Andrew Benintendi a two-run double and Salvador Perez an RBI double for the Royals.

Kyle Zimmer (2-0) followed Minor with a scoreless two-thirds of an inning.

Josh Staumont pitched the final 1 1/3 innings for his third save.

Pirates starter Mitch Keller (1-3) made it through 2 1/3 innings, giving up four runs and three hits, with five walks and two strikeouts.

Carlos Santana drew a one-out walk in the first and, an out later, scored on Soler’s RBI double. After Benintendi walked, Dozier’s triple made it 3-0.

In the third, Perez led off with a double. An out later, Benintendi and Dozier walked to load the bases. That chased Keller, and reliever Sean Poppen walked in a run to make it 4-0.

Against Poppen in the fourth, Whit Merrifield singled with one out and went to third on Santana’s base hit. Perez drove them both in with a single for a 5-0 lead, and Soler followed with an RBI single to make it 6-0.

Pittsburgh cut the deficit in half in the bottom of the fourth. Frazier walked ahead of Gonzalez’s second homer, an estimated 453-foot bomb to left that made it 6-2. Stallings followed with a solo homer, his first, to left-center.

Frazier’s two-run double in the fifth, his first hit of the year and first with Pittsburgh, cut Kansas City’s lead to 6-5.

Against Chris Stratton in the sixth, Soler’s RBI double and Benintendi’s two-run double boosted it to 9-5.

Evans’ RBI single in the eighth closed it to 9-6.