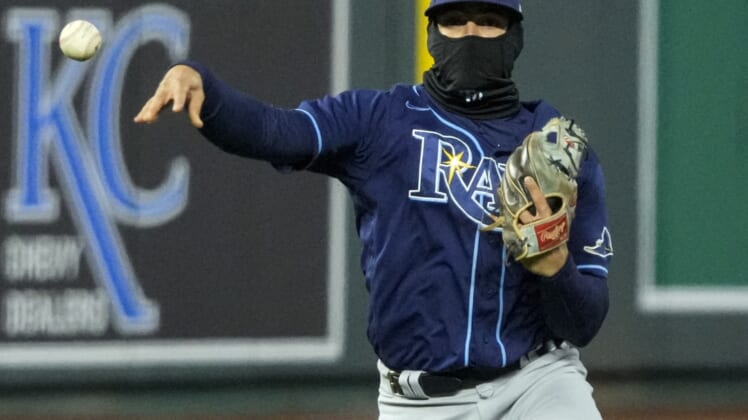 Salvador Perez had his third game-winning hit of the homestand as the Kansas City Royals avoided a three-game sweep with a 9-8 victory over the Tampa Bay Rays on Wednesday.

Perez drove in Nicky Lopez with a two-out, walk-off single in the ninth.

Scott Barlow (1-0) earned the win despite blowing a lead in the eighth and allowing a go-ahead run in the top of the ninth. Diego Castillo (0-1) got the loss after yielding two runs on two hits in the bottom of the ninth.

With the Royals up 7-6 in the eighth, Tampa Bay’s Kevin Kiermaier reached on a one-out single. Barlow replaced Jake Brentz on the mound for Kansas City and served up pinch hitter Randy Arozarena’s RBI double.

In the top of the ninth, Austin Meadows singled and pinch runner Manuel Margot gave the Rays an 8-7 lead when he scored on Joey Wendle’s double.

Michael A. Taylor led off the bottom of the ninth with a single. Jarrod Dyson pinch-ran and stole second. He was bunted to third by Hanser Alberto and scored on a sacrifice bunt by Nicky Lopez.

Wendle, Austin Meadows and Brett Phillips each had two hits for the Rays. Brandon Lowe hit a two-run homer, and Wendle knocked in three runs.

Rays starter Michael Wacha lasted 5 2/3 innings, and he yielded three runs on five hits and one walk. He fanned one.

The Rays, who saw their five-game winning streak end, head home for a 10-game homestand that starts Friday against the Toronto Blue Jays. The Royals, who finished 6-4 on their homestand, open a nine-game road trip at Detroit on Friday.