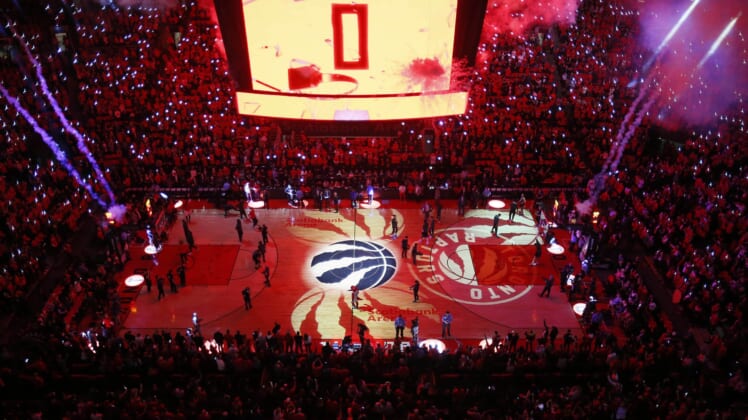 May 25, 2019; Toronto, Ontario, CAN; A general view of Scotiabank Arena before game six of the Eastern conference finals of the 2019 NBA Playoffs between the Milwaukee Bucks and Toronto Raptors. Mandatory Credit: John E. Sokolowski-USA TODAY Sports

It’s highly unlikely that the 2020-21 NBA season will be played in a bubble. While fans being in attendance amid the COVID-19 pandemic is also unlikely, it’s hard for 30 teams to get together and play in a bubble. That could now impact both the NBA’s Toronto Raptors and the city of Kansas City in Missouri.

As we saw once the 2020 MLB season started in July, there’s currently a travel ban for Americans entering Canada due to the United States’ handling of the COVID-19 pandemic. It forced the Toronto Blue Jays to play their home games in Buffalo, New York.

We now have some information regarding the 2019 NBA champion Toronto Raptors and where they might suit up this coming season.

This is interesting in that Kansas City is also seemingly bidding to host an NBA team full time after the Kings relocated to Sacramento some 35 years ago. It won’t be the Raptors. But it’s possible that the city could prove its worth to the powers that be within the NBA.

The question now becomes where the Raptors might host games for the season, slated to start before Christmas (yes, that’s in less than two months).

Canada could provide an exemption and allow both Raptors players and those they are set to host to travel across the northern border. That would solve everything. It would also help Canada from a financial perspective.

On the other hand, Canadian Prime Minister Justin Trudeau has made it clear that health is the overriding priority in his country. It shows up in the COVID-19 numbers compared to the United States.

To put this into perspective, the United States has had more cases of the virus in the past two days than Canada has had since the pandemic hits its shores early last winter.

If health is to remain the top priority for Canada, it seems highly unlikely that the Raptors will play their home games during the 2020-21 NBA season in Toronto. It’s that simple.

Another option for the Raptors would be Buffalo in Western New York. That city did a tremendous job hosting the Blue Jays. It is also more centrally located to other Eastern Conference teams than Missouri.

The season is expected to start a few days before Christmas. The NBA is pushing for a 72-game schedule in order to help its players compete in the 2020 Summer Olympics in Japan (postponed from this past summer).

The Association will have more information regarding this later in the week. For now, teams playing in their home markets are highly unlikely to be able to host fans. Where the Raptors play obviously remains to be seen.