The Kansas City Chiefs built a perennial Super Bowl contender around Patrick Mahomes, but building one of the best offenses in the NFL comes at a cost. Entering a contract year, safety Tyrann Mathieu could be playing with the Chiefs for one final season.

Mathieu, age 29, has been an integral part of Kansas City’s defense since arriving in 2019. A first-team All-Pro selection each of the past two seasons, his versatility and leadership have made him one of the best defensive players in the NFL.

But Mathieu, owed a $14.5 million salary this season, is in a contract year. He projects to be one of the top free-agent talents in 2022, someone the Chiefs want to bring back. But recent comments from general manager Brett Veach cast some doubt about a return.

“The landscape is super tricky. We’re at a $30 million [salary-cap] deficit from what we thought, and next year it’s $15 million. Right now some things are out of our control just because of the cap reductions this year and next year. If you look at our books for next year, we’re going to be over by a bunch.”

Veach is right, the NFL salary cap creates some issues for Kansas City. The cap dropped in 2021 due to a $4 billion revenue hit caused by the COVID-19 pandemic. But the Chiefs spent significant money to overhaul the offensive line this spring and the 2022 salary cap will rise significantly thanks to $100 billion TV contracts. 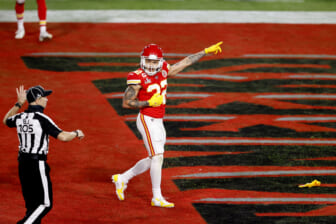 There’s no reason for Mathieu to sign a team-friendly deal, taking money out of his pocket. He reacted strongly to the record-breaking Jamal Adams contract and for good reason. This is one of the best safeties in the NFL and there are plenty of teams who will happily sign him to a lucrative deal next spring.

Losing Mathieu would create new problems for the Kansas City Chiefs. Removing one of the few playmakers means the pass rush needs to be far more productive and cornerbacks must improve their consistency. Those are weaknesses on the roster in 2021, which Mathieu’s talent helps cover.

It’s possible the franchise tag might be considered, but that risks sparking a contract dispute and a holdout. At this point, Kansas City needs to hope Mahomes is willing to restructure and the 2022 cap is even higher than expected.