While many might have expected the Kansas City Chiefs to go with a wide receiver for their first pick in the 2022 NFL Draft, the decision to instead trade up for cornerback Trent McDuffie was an easy one for the team’s decision-makers.

On Thursday, the Chiefs were part of several trades on night one of this year’s draft. Seeing a player that was high on their draft board still available, the team got the New England Patriots on the horn and offered up three picks, including No. 29 in the first round, so they could move up to pick 21. When the time came, they took Washington defensive back Trent McDuffie.

The move may have surprised some since the team has a major hole at wide receiver after trading superstar pass-catcher Tyreek Hill to the Miami Dolphins last month. However, when asked about the trade at a post-draft press conference, Chiefs General Manage Matt Veach explained that the move was necessary to land a player the organization liked a lot. One that they graded as high as Ahmad Gardner and Derek Stingley, Jr. Two defensive backs taken in the first five picks of yesterday’s draft.

Related: Top 20 NFL Draft prospects heading into the second round

“I think we were committed to being selectively aggressive, and if a player like a Trent McDuffie was there, ‘Hey, let’s go make a move and get him because he’s really good,” Veach said [h/t ArrowheadPride.com]. “Probably wouldn’t have been there at 29. We were surprised he was there when we selected him with New England’s pick, but I think that was our mindset going in, and we just followed the plan.”

“We had called teams– I believe the pick before and the pick after — of the New England trade, just to put ourselves in the position. The way the board was falling and knowing that we’re picking real late in this draft here, and the odds of a guy like McDuffie being at 21, let alone 29, were very low, so we just thought it was the right time to make that move,” he added. 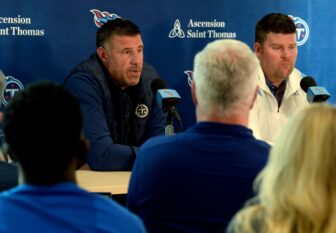 While the Chiefs could use some improvements to their wideout corps., their defense has been a weakness for several years and may have cost them a Super Bowl title, and another trip to the big game. Addressing the needs there is a sound decision, and if the team landed a player they never expected to still be available, then it’s hard to knock the Kansas City Chiefs talent evaluators in going after someone they had a high grade on and needed.