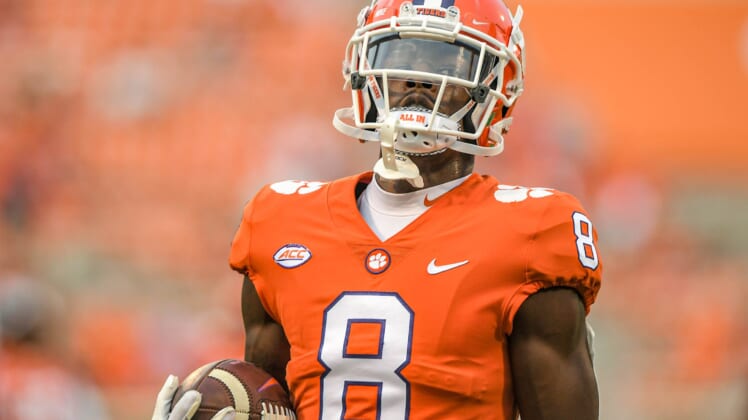 As a freshman at Clemson, Justyn Ross burst onto the scene with an incredible season paired with Trevor Lawrence, racking up 1,000 receiving yards and nine touchdowns on their way to winning the College Football National Championship.

Ross followed up a strong first year with the Tigers by hauling in 66 passes for 865 yards and eight touchdowns as a sophomore.

It all came unraveled his junior year as Ross had to undergo surgery to address a congenital fusion condition in his neck and spine, knocking him out for the entire season.

While Ross was able to get back on the field in his redshirt junior season, a stress fracture in his foot limited him to just 10 games, catching 46 passes for 514 yards and three touchdowns.

Ross then declared for the 2022 NFL Draft following his final game at Clemson. Now a player who was once seen as a potential first-round pick faced questions about his long-term health.

But all Ross needed was one team to take a chance on him, and even though it didn’t happen with his name called during draft weekend, the Kansas City Chiefs were intrigued by the 6-foot-4 wideout’s skill set and signed him as an undrafted free agent.

With Patrick Mahomes going through his first NFL season without Tyreek Hill by his side, he’ll need to rely on the likes of Travis Kelce, JuJu Smith-Schuster, Marquez Valdes-Scantling and others, but should injuries strike, the Chiefs may have a need for a player like Ross.

Although Ross faces an uphill battle to even crack the roster, he’s already generating a buzz during Organized Team Activities, as displayed on Wednesday.

With a total of 12 other wide receivers on the roster besides Ross, he’ll need everything to go his way to crack the final 53, or earn a practice squad spot, but it appears his hands are off to a good start.