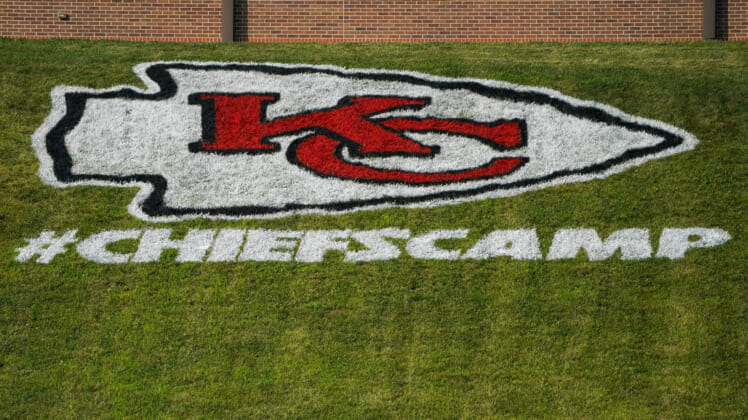 The Kansas City Chiefs enter the 2022 NFL Draft in an interesting spot, holding pairs of first- and second-round picks but wanting more. There are clear draft needs this team must address and in an unusual draft class, some deals will likely need to be made to improve this roster.

Thanks to the Tyreek Hill trade, the Chiefs acquired the 29th and 50th overall picks from the Miami Dolphins. It provides general manager Brett Veach with a lot of flexibility, either putting him in a position to snag falling talent or he can move up and down the draft board with ease.

Speaking to reporters in advance of the NFL Draft, Veach offered some insight into his potential game plan for Day 1 and Day 2. Specifically, highlighting that the Chiefs only graded 15 or 16 prospects as first-round talents. Because of that evaluation, it’s possible Kansas City’s top options will all be gone.

“The odds of maybe one of those guys falling isn’t great.”

It’s certainly not the position a front office wants to be in on draft night. While two first-round picks are great, they lose value if the general manager believes the players available in that range are Round 2 talents. Essentially, Kansas City would just be paying more for those players with the only upside being a fifth-year team option that is fully guaranteed.

Given how forthright Veach is being about the 2022 draft class from the Chiefs’ perspective, a trade seems likely. It all comes down to whether or not the team makes a move up the board to snag one of its first-round targets or moves down and collects assets to fill out the roster.

Let’s examine three potential trade routes the Kansas City Chiefs could take in Round 1 on April 28.

Brett Veach trades down, loads up on Day 2

Veach is still very high on the players available in the 2022 NFL Draft. While he might only see 16 first-round talents out of 32 picks worthy of Round 1 selections, he also recognizes there is tremendous value to be found on Day 2.

“When you look at value in this draft, 30-60 is really good. We were able to get Nick Bolton and Creed Humphrey last year. I think there will be value similar to that. There were will be really good players in that second and third round.”

Brett Veach on the value of Day 2 picks in NFL Draft, via Kansas City Star

The Chiefs love Rounds 2 and 3 of the NFL Draft. A year ago, Kansas City selected center Creed Humphrey with the 63rd overall pick. He earned All-Rookie Team honors and was graded as the best center in the NFL by Pro Football Focus. Kareem Hunt, Chris Jones, Nick Bolton and L’Jarius Sneed are also among the mid-round gems found by Kansas City.

There is going to be a team with an early pick on Round 2 who wants to move up, either seeking a quarterback with a fifth-year team option or a player available they love. If the right offer is made, likely a package involving a top-40 pick and a top-100 selection, Veach will probably trade down.

Kansas City Chiefs trade up for a wide receiver

It’s a safe bet there are multiple wide receivers with first-round grades on the Kansas City Chiefs draft board. If the right player falls outside the top-12 picks, Veach might be inclined to jump ahead of teams like the New Orleans Saints, Green Bay Packers and Philadelphia Eagles to land his guy.

A player like Jameson Williams comes to mind. While he’s still recovery from a torn ACL, the talent is worthy of a top-10 pick. The Chiefs wouldn’t need him immediately. JuJu Smith-Schuster, Marquez Valdes-Scantling and Travis Kelce could hold things down as the top pass-catching threats. When Williams is healthy, he’ll be the No. 1 receiver in this offense with speed that can’t be matched.

It might cost the Chiefs a first- and second-round pick to move into the top 20, but the cost is justified when you land a player like this. Plus, this is another reason why Kansas City collected immense draft capital.

Cornerback remains one of the biggest Chiefs draft needs. Unfortunately, the best coverage options in this draft class will be long gone by the time Kansas City is on the clock. However, there is one scenario that could accomplish multiple tasks.

While Bradberry struggled last season (100.3 passer rating allowed when targeted), he played at a Pro Bowl level in 2020 and also held up nicely in coverage a year prior. The 6-foot-1 cornerback offers Kansas City the size it looks for at the position, plus he brings experience matching up against No. 1 receivers.

For the cost of moving down a few spots and a pick outside the top 100, Veach fills a void in his secondary and can still grab a player he likes early on Day 2. That’s an ideal outcome for a Super Bowl contender.