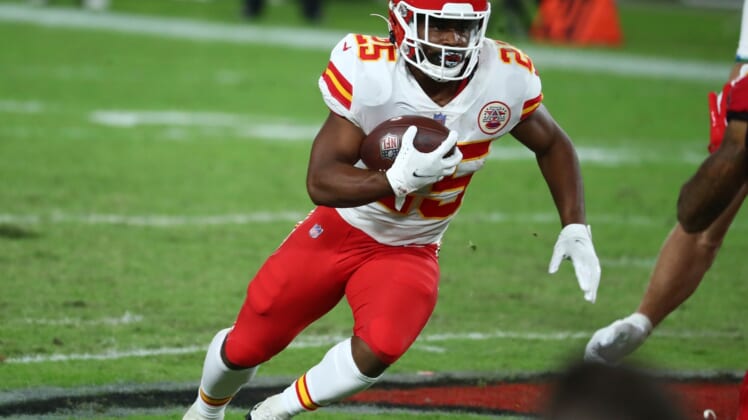 Fellow running back Le’Veon Bell and wide receiver Sammy Watkins are not expected to compete for the Chiefs, per reports.

Edwards-Helaire is questionable with hip and ankle injuries. He sat out the final two games of the regular season as well as Kansas City’s 22-17 divisional round victory over the Cleveland Browns last Sunday.

Darrel Williams led the Chiefs by rushing 13 times for 78 yards against the Browns.

Edwards-Helaire, 21, has team-leading totals in carries (181), rushing yards (803) and rushing touchdowns (four) since being selected by Kansas City with the 32nd overall pick of the 2020 NFL Draft. He also has 36 catches for 297 yards and a score.

Bell (knee) and Watkins (calf) are questionable for Sunday’s game with their respective injuries.

Bell rushed for 254 yards and two touchdowns in nine games with the Chiefs.

Demarcus Robinson and Mecole Hardman likely will see more snaps in place of Watkins, who had 37 receptions for 421 yards and two touchdowns this season. Hardman had four catches for 58 yards versus Cleveland while Robinson had one reception for 14 yards.