Patience is not so much a virtue for Patrick Mahomes when he fails to read big-play opportunities.

The Kansas City quarterback admits he has overlooked some chances at chuck yardage as opponents use Cover-2 schemes and force the Chiefs (3-4) to settle for shorter gains.

On Monday, Kansas City will again try to regroup against the New York Giants (2-5) at Kansas City, Mo.

“When you have some big-play opportunities down the field, you’ve got to go for it,” Mahomes said, noting that back-end coverage has prompted him to mistakenly “eliminate something before even seeing it.”

Kansas City’s defensive shortcomings have led to Mahomes pressing sometimes to make plays. The Chiefs rank last in the NFL in yards allowed per play (6.6) and find it difficult to get off the field.

They blanked opponents in the second half of their last two games, rallying past Washington before falling 27-3 in a mismatch last week at Tennessee. 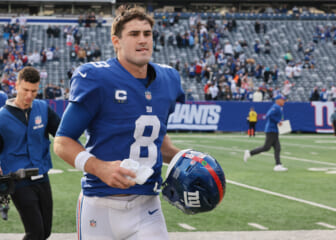 Rookie Nick Bolton recorded 15 tackles in the loss to the Titans and is emerging as a run-stopper, though veterans Frank Clark, Chris Jones and Tyrann Mathieu have rarely flexed their playmaking capability.

Chiefs coach Andy Reid insists the locker room is strong and capable of correcting fundamental flaws. Yet time is fading fast if Kansas City is to position itself as the AFC contender most predicted.

“We just need to do it. I’ve done a lot of talking,” Reid said. “We just need the results. There’s not a lot I can say that hasn’t been said. … We’ve been giving away some things free and we’ve got to take care of that.”

As an example, the Chiefs have already committed 17 turnovers, a mark that ranks last in the NFL and exceeds their total (16) in 2020. Their minus-10 turnover differential is tied for last in the league.

Mahomes, who took a crunching hit to the head in the fourth quarter of the Titans defeat but passed concussion protocol, has been especially careless, throwing a league-high nine interceptions against 18 touchdowns. He still ranks fourth in passing yards (2,093) and sixth in quarterback rating.

Uncustomary drops, inexplicable fumbles and blown protection have contributed to Mahomes’ problems, though he is quick to accept blame and even owned up to his mistakes while meeting this week with teammates.

“To see our main leader take responsibility and not point the finger, it sets a precedent for us,” said Alex Okafor.

It could be that a blueprint for defending the Chiefs’ explosive offense has been established, though Giants coach Joe Judge called that a “foolish narrative” to accept.

“How did the league catch up to ‘em,” Judge asked. “Is everyone as fast at Tyreek Hill, (Mecole) Hardman? Can everybody cover the ball as deep as (Mahomes) can throw that thing? This is a damn good team. They’re very explosive, very dangerous.”

The Giants enter Monday’s game off a 25-3 victory over the Carolina Panthers in Week 7, their best defensive performance of the season. New York held Carolina to 173 total yards (2.8 per play) and recorded 6.0 sacks, including 2.5 by rookie Azeez Ojulari.

On offense, improvement in the red zone will be necessary if the Giants want to establish control. Their 45 percent conversion rate for touchdowns ranks dead last in the league. Getting some offensive playmakers back off injury would be extremely beneficial in testing the Chiefs’ shaky defense.

While running back Saquon Barkley (ankle), wide receiver Kenny Golladay (knee) and linebacker Lorenzo Carter (ankle)are out, wideouts Kadarius Toney (ankle) and Sterling Shepard (hamstring) are expected to be available despite being listed as questionable on the final injury report.

The Chiefs enter the game as 10.0-point favorites at PointsBet, which hasn’t deterred the public. Kansas City is being backed by 61 percent of the bets and 71 percent of the spread-line handle.

AI-driven analytics company Quarter4 has forecast the Chiefs with a 66 percent chance of winning the game.