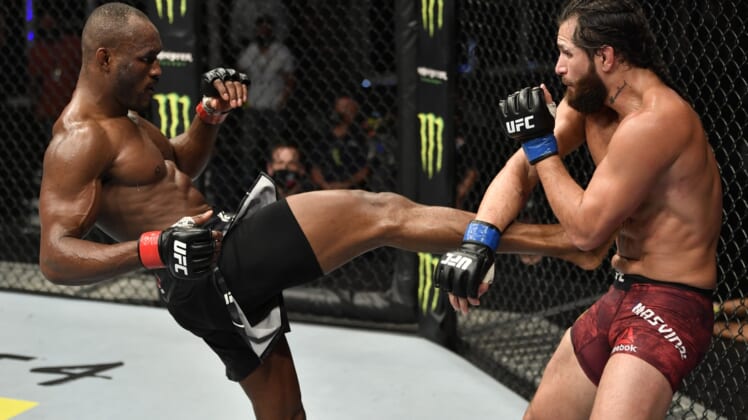 Saturday night’s UFC 261 pay-per-view event presents an interesting case study in the sports world’s attempt to move on from the coronavirus pandemic.

While many sports have resumed admitting fans to outdoor events, and some states have allowed limited indoor attendance, the card at VyStar Veterans Memorial Arena in Jacksonville, Fla. is one of the first major sporting events to feature a packed house indoors since the world ground to a halt 13 months ago.

How this plays out in a state which currently is among the highest rate of per capita virus transmission remains to be seen. Masks will be handed out at the door, but will not be mandatory.

Either way, the 15,000 tickets for the card sold out within minutes, in large part because of a loaded-up lineup which is topped by two title fights.

The main event is a welterweight title rematch of South Floridians, as champion Kamaru Usman (18-1) once again defends his title against Jorge Masvidal. The duo squared off just last summer at UFC 251, and the issue seemed settled as Usman earned a one-sided, unanimous decision.

However, Masvidal had accepted the bout on a week’s notice, and has chirped since that things would be different with a full training camp. Usman, for his part, decided to oblige Masvidal (35-14), who hasn’t fought since the loss, to shut him up once and for all.

“No more excuses out of this guy,” said Usman, who has won all 13 of his UFC fights. “He gets his training camp and this time I’m finishing the job.”

The evening’s co-feature bout looks excellent on paper, as the UFC’s first Chinese-born champ, Zhang Weili (21-1), puts her strawweight belt on the line against former titleholder Rose Namajunas (10-4) of Colorado.

Weili has won 21 straight bouts, most recently a split decision over former champ Joanna Jedrzejczyk that was a consensus pick for 2020 Fight of the Year. Namajunas has won four of her past five.