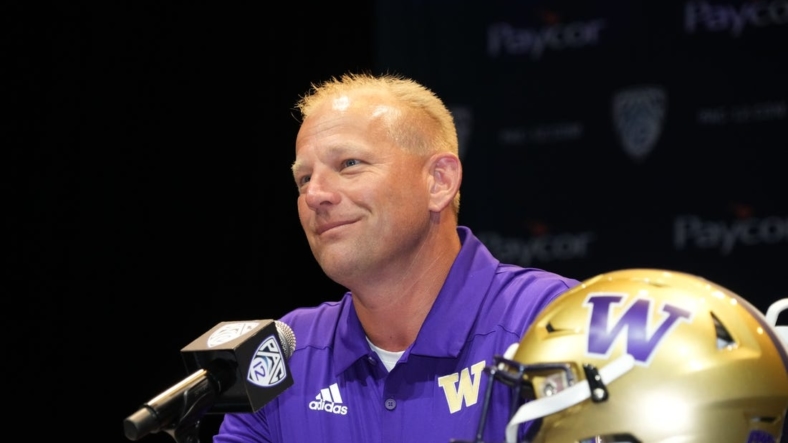 After a tumultuous 2021 season, Washington hopes new coach Kalen DeBoer leads them back to some a sense of normalcy Saturday night as they open the season against an apparently overmatched visiting Kent State.

Yet, a year ago, Washington’s season launched with a stunning 13-7 loss to Montana and then-coach Jimmy Lake and the Dawgs never regained their footing on the way to a 4-8 season.

DeBoer, formerly at Fresno State, is the fourth Washington head coach in four seasons. Chris Petersen departed after the 2019 season and was replaced by Lake — but after the terrible start, Lake was under fire all season and was terminated in November following a sideline incident in which he was seen shoving one of his players — and was replaced on an interim basis by defensive coordinator Bob Gregory for the rest of the 2021 season.

Last week DeBoer named Michael Penix Jr., a transfer from Indiana, as the starting quarterback, and Wayne Taulapapa, a graduate transfer from Virginia, as the No. 1 running back.

Taulapapa, DeBoer said, “might be one of the most mature guys on our football team. It means a lot to him,” and cited his 27 career starts and ability to handle rushing, receiving and blocking duties well.

A win for the Huskies would be the 400th in school history at home. Washington was picked to finish sixth in the Pac-12 this season in a conference media poll.

Kent State was picked to finish second in the MAC East in a media poll. The program has a unique connection with Washington, in that legendary Huskies head coach Don James was Kent State’s head coach for four seasons before he arrived to turn the Huskies into a West Coast power for most of his tenure (1975-92).

“The football gods, they don’t miss,” Kent State head coach Sean Lewis said, noting that he keeps a book about James in his office and uses it for coaching guidance.

The Golden Flashes have a loaded nonconference schedule starting with a trip west to Seattle for their first-ever meeting with Washington, followed by a trip to No. 9 Oklahoma next week, and a Sept. 24 visit to No. 3 Georgia.

Washington follows the opener with a game against FCS team Portland State and then hosts No. 15 Michigan State before turning to Pac-12 play against Stanford – with all four game at Husky Stadium.