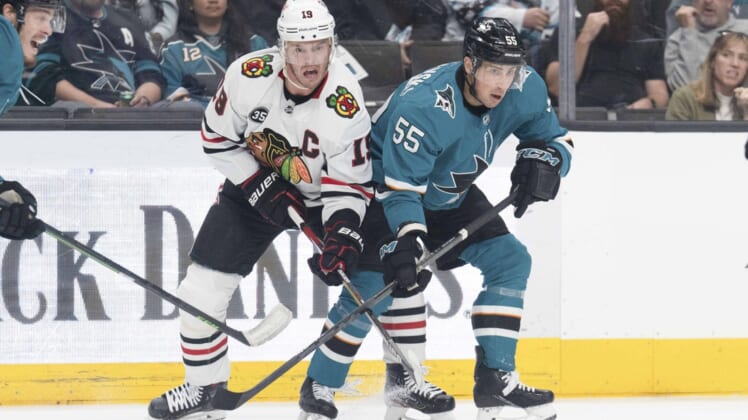 Timo Meier collected one goal and one assist to lead the host San Jose Sharks to a 4-1 victory over the Chicago Blackhawks on Saturday.

Jasper Weatherby, Tomas Hertl and Nick Bonino also scored for the Sharks (31-35-12, 74 points), who have two wins in 13 games. Goaltender Kaapo Kahkonen made 27 saves in an outstanding performance.

Tyler Johnson replied for the equally floundering Blackhawks (26-42-11, 63 points), who have only two wins in 14 games. Goalie Kevin Lankinen stopped 15 shots in a losing effort.

Despite the Blackhawks holding the bulk of scoring chances, the Sharks staked a three-goal lead starting with Weatherby’s tally at the 6:03 mark. Sasha Chmelevski’s long shot was stopped but Scott Reedy grabbed the loose puck before sending a short pass to Weatherby as he headed to the net, and he made no mistake for his fifth goal of the season.

Hertl’s 29th of the season 58 seconds into the middle period doubled the lead. Meier stole the puck just outside his own blueline and made a cross-ice pass on the ensuing two-on-one rush that Hertl buried with a potent one-timer.

Meier then made it a 3-0 affair with his 34th of the campaign just past the midway point. He intercepted a pass and eventually converted a loose puck in the flurry that followed the scoring chance he created.

Johnson gave the visitors life when he netted his third goal of the season with four minutes remaining in the middle frame, finishing an open chance from the slot set up by Jonathan Toews.

However, Bonino’s power-play goal 6:19 into the third period dashed Chicago’s comeback hopes. After taking a pass and working into the left circle, Bonino ripped a top-corner, short-side shot for his 13th of the season to round out the scoring.