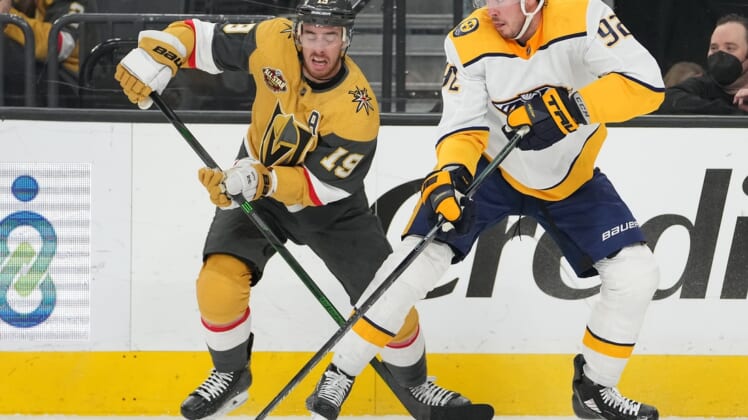 Filip Forsberg scored two goals and Juuse Saros made 41 saves as the Nashville Predators moved into first place in the Central Division with a 3-2 victory over the host Vegas Golden Knights on Tuesday night.

It was the 28th career two-goal game for Forsberg. Yakov Trenin also scored for Nashville which improved to 9-1-1 over its last 11 games.

William Karlsson snapped a seven-game goalless drought and also had an assist, and Shea Theodore also scored for Vegas. Logan Thompson, the reigning Bastien Memorial Award winner which goes to the top goaltender in the American Hockey League, stopped 23 of 26 shots in his first NHL start.

Nashville took a 1-0 lead at the 2:41 mark of the second period following a turnover by Theodore when Forsberg snapped a wrist shot from the top of the left circle under Thompson’s left arm.

Trenin, playing in his 100th NHL game, made it 2-0 a little over four minutes later when he redirected Philippe Myers’ shot from the right point off the crossbar and into the net for his seventh goal of the season.

Forsberg increased the Nashville lead to 3-0 at the 6:08 mark of the third period when he rushed up the left boards and went around Alex Pietrangelo before beating Thompson with a backhand shot inside the left post for his 17th goal of the season.

Karlsson cut it to 3-1 with 7:59 to go when a Brayden McNabb shot deflected in off his skate for his fourth goal of the season and the 100th of his career with the Golden Knights.

Vegas pulled Thompson for an extra attacker with 3:25 remaining and Theodore cut it to 3-2 with 1:46 left when he blasted a slap shot from the point past a screened Saros for his seventh goal of the season.

Pietrangelo had a good chance to tie it with 11 seconds left but Saros stopped his one-timer from the low left circle.