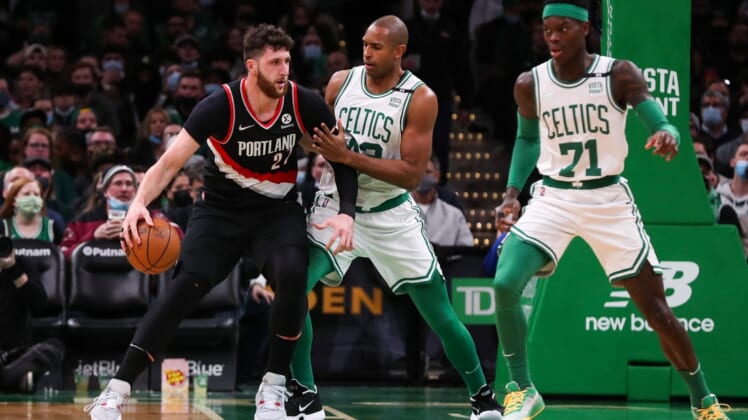 Jusuf Nurkic had 29 points and 17 rebounds as the visiting Portland Trail Blazers held the Boston Celtics without a field goal for the final 7:19 of the game in a 109-105 victory Friday night.

Robert Covington hit a 3-pointer to give Portland a 103-102 lead with 32 seconds left before Jayson Tatum made two foul shots six seconds later to put Boston ahead.

Nurkic’s hook shot gave the Blazers the lead with 13 seconds left, and he sealed the victory with two free throws with 0.8 seconds left.

CJ McCollum contributed 24 points, Anfernee Simons added 21, and Ben McLemore had 12 for Portland, which avenged a 145-117 loss to the Celtics on Dec. 4.

Tatum scored 27 to pace Boston, which lost its second straight and fell one game under .500 at 23-24. Jaylen Brown scored 22 points, Grant Williams added 13 and Romeo Langford had 12.

Boston took its biggest lead of the game at 100-89 with 7:19 to play after Langford and Payton Pritchard hit consecutive 3-pointers and Williams scored on a layup.

Portland answered with 11 straight points and tied the game at 100 on Nassir Little’s dunk with 1:37 remaining.

Portland made six of its first eight 3-point attempts and took a 30-25 lead into the second quarter. The Blazers extended their lead to 15 before Boston responded with a 22-5 run.

Brown drilled a 3-pointer just before the buzzer to give the Celtics a 58-54 advantage at the half.

Robert Williams III returned following a two-game absence and had five points and 10 rebounds for Boston, which shot 11 of 37 (29.7 percent) from 3-point range.

Tatum was 0-for-6 from 3-point range and has missed his last 20 shots from beyond the arc.

Boston played its sixth straight game without forward Marcus Smart, who is working on his conditioning following a stint in the health and safety protocol.