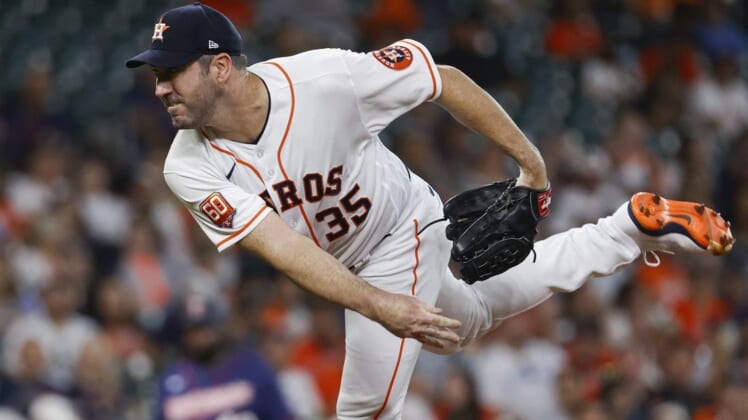 Verlander (16-3) overwhelmed the Twins for the second time this season, following an earlier performance at Target Field where he carried a no-hitter into the eighth inning of a 5-0 victory on May 10. In that start, Verlander walked a pair and struck out five over eight scoreless frames.

In the opener of this three-game series, Verlander allowed just one baserunner, and that came when Twins center fielder Nick Gordon struck out but reached on a wild pitch with one out in the second inning. Verlander recovered by fanning Max Kepler and Gio Urshela to close that frame.

Verlander followed by setting the Twins down in order in the third, fourth, fifth and sixth. He struck out a pair of batters in the third and fifth and fanned Jake Cave for the second time to open the sixth.

The right-hander also moved past Pedro Martinez and Max Scherzer and into 13th place on the all-time strikeouts list with 3,161. Verlander finished with 10 strikeouts, his third double-digit strikeout effort this season.

Before Bregman struck with two outs in the seventh, the Astros scratched across solo runs off Twins right-hander Aaron Sanchez (3-4) in the second and fourth.

Mauricio Dubon plated Bregman with a two-out, opposite-field single for a 1-0 lead in the second before Trey Mancini followed a Kyle Tucker double with an RBI double to straightaway center that eluded Gordon for a two-run edge.

After Sanchez departed with two on and no outs in the fifth, the same inning in which Twins manager Rocco Baldelli was ejected, Tucker rolled into an inning-ending double play that snuffed a bases-loaded threat.

Yordan Alvarez grounded into a double play with two aboard in the seventh, but Bregman followed with his 19th home run, lofting a first-pitch slider from Trevor Megill into the left field seats to score Jose Altuve.

The Twins scored twice in the ninth and pushed the tying run into scoring position with two outs before Astros reliever Bryan Abreu fanned Cave to send Minnesota to its fourth consecutive loss.