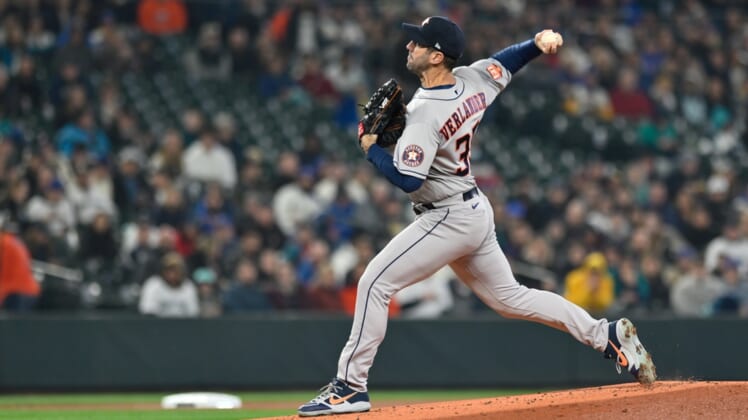 Martin Maldonado got his first hit of the season, a two-run homer, and Jeremy Peña went 3 for 3 with a double and triple, scored twice and drove in a run as the Astros evened the series at a game apiece.

Verlander (1-1), a 39-year-old right-hander who missed all of last season following Tommy John surgery, allowed three hits. He didn’t walk a batter and struck out eight.

Astros reliever Hector Neris pitched a 1-2-3 ninth to wrap up the victory.

Ty France had two hits for the Mariners, who were baffled after winning their home opener against Houston 11-1 Friday night.

Mariners right-hander Chris Flexen put together a quality start, but it went for naught. Flexen (0-2) completed six innings and allowed three runs on five hits, with one walk and three strikeouts.

The Astros took the lead in the second inning as Niko Goodrum led off with a double to right field, advanced to third on Chas McCormick’s fly out to right and scored on Peña’s sacrifice fly to center.

It remained 1-0 until the fifth, when Peña led off by grounding a single into center. Maldonado, who was 0-for-15 this season to that point, lined an 0-1 pitch over the left-field wall and into the Astros’ bullpen to extend the lead to 3-0.

The Astros tacked on a run against Mariners reliever Matt Festa in the seventh. With one out, Peña tripled to right-center and, after a walk to Maldonado, scored when Jose Altuve lined a single to center.

The highlight for the Mariners was a diving catch by rookie outfielder Julio Rodriguez just shy of the warning track in left-center to rob Michael Brantley of extra bases in the fifth inning.

The Mariners were without right fielder Mitch Haniger, who went on the COVID-19 list after testing positive earlier in the day.