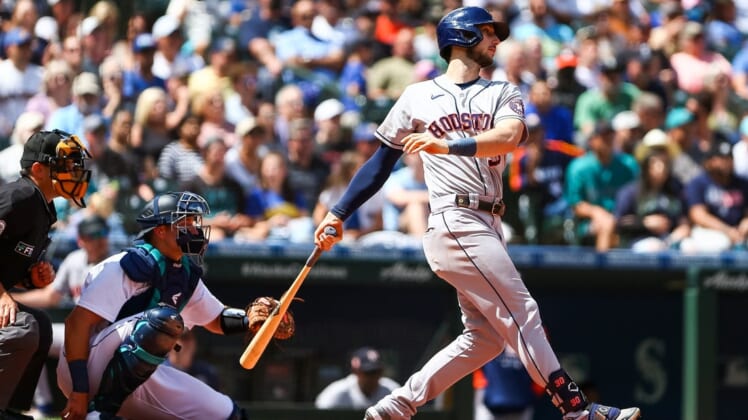 Justin Verlander pitched seven strong innings as the Houston Astros extended their lead in the American League West to a dozen games by defeating the host Seattle Mariners 3-1 Saturday afternoon.

Kyle Tucker and Yuli Gurriel had run-scoring doubles for the Astros, who improved to 4-0 since the All-Star break. Houston has won the first two games in the series with the Mariners, who had a 14-game winning streak snapped the previous night.

Carlos Santana hit a solo home run for the Mariners.

Verlander (13-3) allowed one run on four hits with nine strikeouts to outduel fellow right-hander Logan Gilbert (10-4) and improve to 20-10 in his career against Seattle, including 4-1 this season. Bryan Abreu worked a 1-2-3 ninth for his second career save and first of the season.

After a leadoff single by J.P. Crawford in the first inning and a one-out single by Adam Frazier in the second, Verlander retired 15 consecutive batters.

Verlander got into a jam in the seventh. With one out, Santana homered to right-center field to make it 2-1. Eugenio Suarez walked and Frazier lined a single to center, sending Suarez to third. Frazier stole second before Verlander struck out Cal Raleigh on a chin-high, 99-mph fastball. Pinch-hitter Kyle Lewis walked to load the bases but Verlander got out of the inning by striking out Sam Haggerty.

Gilbert, who defeated the Astros twice previously this season, went six innings and allowed two runs on five hits. He struck out eight.

The Astros scored twice in the fourth inning. With one out, Yordan Alvarez drew a walk. Tucker lined a double to center to bring home the game’s first run and Gurriel followed with a run-scoring double to left.

Houston added an insurance run in the eighth. Jose Altuve and Jeremy Pena led off the inning with singles off Matt Brash, with Altuve taking third on the latter. Ryan Borucki came on and struck out Alvarez but then unleashed a wild pitch to allow Altuve to score.

The Mariners played for the second straight game without All-Star outfielder Julio Rodriguez because of left wrist soreness.