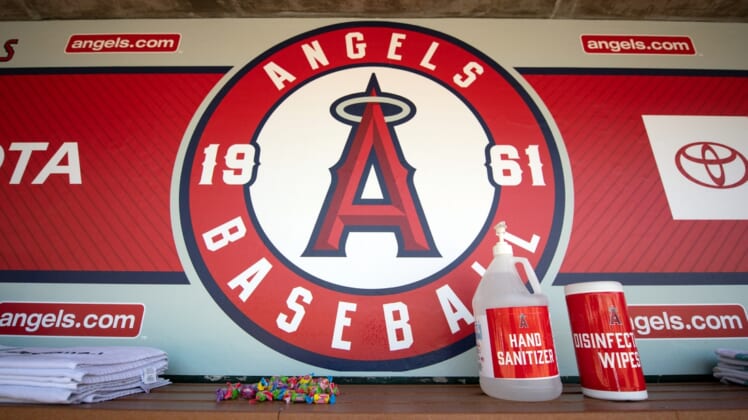 Justin Upton’s seventh inning grand slam broke open a close game and propelled the Los Angeles Angels to a 10-3 victory over the Minnesota Twins on Friday night in Anaheim, Calif.

The Angels had plenty of offense to go around, also getting a homer and two-run single from Jared Walsh, a two-run single by Mike Trout and two hits apiece from David Fletcher and Jose Iglesias.

The Angels took a 4-3 lead into the bottom of the seventh before putting together a six-run inning, five of the runs scoring with two out.

After scoring their first run of the inning on a one-out single by Fletcher, the Angels later had runners on first and third with two out for Trout.

Trout fell behind in the count 0-2, but after Fletcher reached second on a wild pitch that made the count 2-2, the Twins decided to walk Trout intentionally to load the bases for Upton.

Upton then unloaded on a 69-mph curveball from left-hander Caleb Thielbar for his second homer of the season, his eighth career grand slam and a 9-3 Angels lead. Walsh followed with his fourth home of the season, tying Trout and Shohei Ohtani for the team lead.

Both starting pitchers, Andrew Heaney of the Angels and the Twins’ Lewis Thorpe, threw three scoreless innings before the Angels opened the scoring in the fourth.

With two out and nobody on, Trout walked and went to third on a double by Upton. Walsh followed with a single to drive in both baserunners and give the Angels a 2-0 lead.

Meanwhile, Heaney took a shutout into the sixth inning but was pulled by Angels manager Joe Maddon when the Twins put two on with one out. Reliever Aaron Slegers, a 6-foot-10 right-hander, immediately gave up a two-run double to Mitch Garver, tying the game at 2-2.

Josh Donaldson followed with an RBI single to give the Twins a 3-2 lead.

The Angels, however, regained the lead in the bottom of the sixth. Fletcher led off with a single and went first-to-third on a broken-bat single by Ohtani, who alertly took second on center fielder Jake Cave’s throw to third in an attempt to get Fletcher.

Trout then singled through a drawn-in infield into left field to drive in both baserunners and put the Angels up 4-3.

Willians Astudillo, a backup catcher, pitched a 1-2-3 bottom of the eighth inning. The radar gun measuring his pitches in the 40-50 mph range.