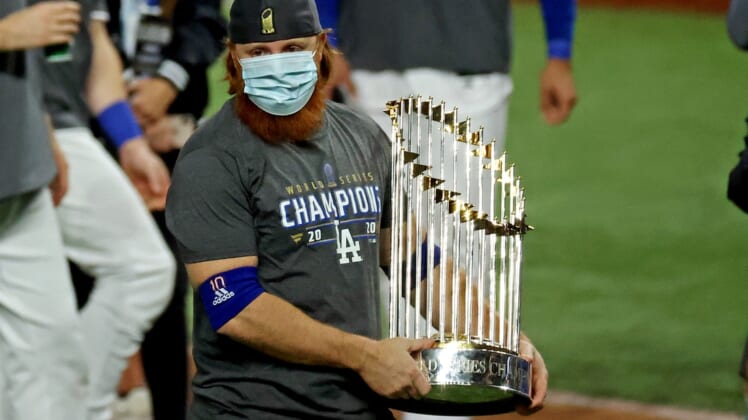 Justin Turner tested the free agent market but decided to stay at home with the reigning World Series champions.

The veteran third baseman agreed to re-sign with the Los Angeles Dodgers, he announced Saturday on Twitter.

Multiple media outlets reported that Turner landed a two-year, $34 million contract. The deal reportedly includes a team option of $14 million for 2023, and Turner also could earn more with incentive bonuses.

Turner’s new annual average salary of $17 million is slightly more than the $16 million average of the four-year, $64 million deal he signed with the Dodgers in December 2016.

Last season, Turner batted .307 with a .400 on-base percentage, four homers and 23 RBIs in 42 games during the pandemic-shortened campaign. In the postseason, he batted .250 (17-for-68) with three homers and six RBIs as the Dodgers won the World Series for the first time since 1988.

In six Fall Classic games against the Tampa Bay Rays, Turner hit .320 (8-for-25) with two homers and two RBIs. He was removed late in the decisive Game 6 after learning that he tested positive for COVID-19. Turner later came out to celebration the championship on the field with his teammates, only occasionally wearing his mask, drawing public criticism that he potentially exposed others to the coronavirus.

Major League Baseball announced it would not punish Turner for breaking its COVID-19 protocols, and Turner issued an apology.

“I sincerely apologize to everyone on the field for failing to appreciate the risks of returning to the field,” he wrote in a statement. “I have spoken with almost every teammate, coach, and staff member, and my intentions were never to make anyone uncomfortable or put anyone at further risk.”

Turner was the Most Valuable Player of the 2017 NL Championship Series when he hit .333 (6-for-18) with two homers and seven RBIs as the Dodgers beat the Chicago Cubs in five games.