Tiger Woods appears to be progressing on his road to recovery.

“(Woods is) doing well, especially all things considered,” fellow PGA Tour player and friend Justin Thomas said on a recent appearance on the No Laying Up podcast.

Thomas acknowledged that he visits Woods a few times a week when he’s not on the road. Woods has kept a relatively low public profile since sustaining serious leg injuries after crashing an SUV on Feb. 23 in Rancho Palos Verdes, California, which is located in Los Angeles County.

“It’s Groundhog Day — every day is exactly the same for him,” Thomas said. “… He’s able to be a dad somewhat again, which is most important. He’s still his sarcastic (expletive) self, so nothing’s really changed there. So I’m glad to see he’s as chipper as always.” 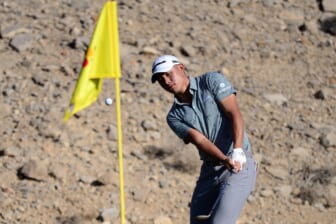 Woods, 45, is recovering from open fractures to his tibia and fibula, which needed a rod inserted to aid healing, and also foot and ankle injuries that needed screws and pins placed to aid in stabilization.

The 15-time majors winner’s next public appearance could be next month at his charity tournament, the Hero World Challenge, in the Bahamas.

Woods has won the Masters on five occasions, the PGA Championship four times and the U.S. Open and The Open Championship on three separate occasions.