Justin Thomas rises to No. 5 in world rankings 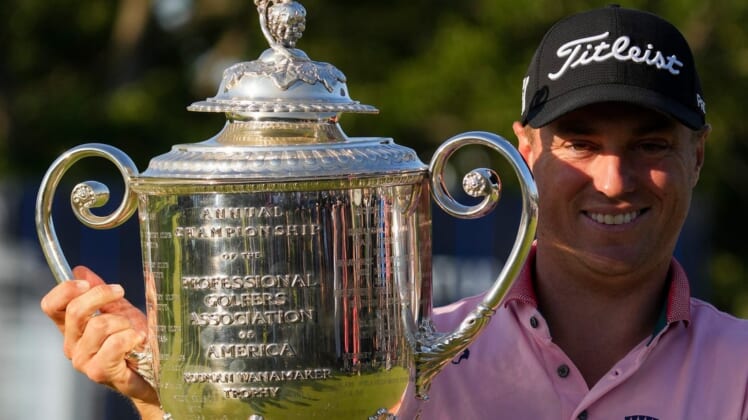 Justin Thomas rose to No. 5 in the Official World Golf Ranking on Monday, climbing four spots following his win at the PGA Championship.

Thomas, who has been No. 1 on two different occasions, had fallen to No. 9 entering last week. His come-from-behind victory at Southern Hills in Tulsa, Okla., snapped a 14-month winless drought.

“I just think it’s just so hard to win,” Thomas said on Sunday. “Like, it is. I legitimately think it’s harder to win now than it was when I first came out on (the PGA) Tour just for the sake of the depth of the tour.

“I clearly haven’t won the amount of times that a lot of guys — not a lot; a handful of guys have this year. But I feel like I’ve played just as well as anybody on tour this year. I just haven’t had the trophies to show, and I’d fallen in the World Ranking, and that just kind of shows how strong it was or how strong the game of golf is.”

Will Zalatoris rose 16 spots to a career-high 14th in the world after falling to Thomas in a three-hole playoff. Zalatoris is still seeking his first career PGA Tour victory.

So, too, is Mito Pereira, the Chilean who double-bogeyed the 72nd hole while needing a par to win and a bogey to be part of the playoff. Pereira did vault 51 spots in the rankings to No. 49, climbing inside the coveted top 50 positions that qualify players for most every major worldwide event.

Thomas, 29, now has a pair of Wanamaker trophies on his resume along with the 2021 Players Championship. That had been his most recent victory before erasing a seven-shot deficit with a 67 on Sunday.

“I’m very fortunate right now that although there might be people ranked higher than me in the World Ranking, but at least in my eyes, I’m on top of the golfing world right now. And I’m very, very proud of that.”