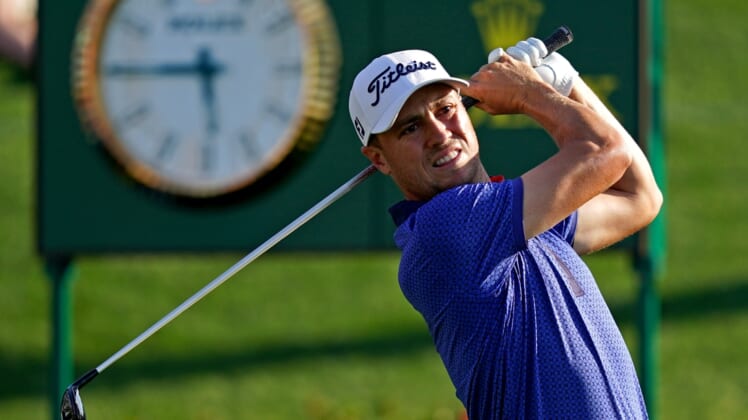 Justin Thomas climbed to No. 2 in the official world golf rankings following his victory at The Players Championship on Sunday.

The win vaulted Thomas past Jon Rahm despite the Spaniard’s tie for ninth place at TPC Sawgrass. Thomas also moved up three spots in the United States Ryder Cup team standings and he is now behind only Dustin Johnson and Bryson DeChambeau, who finished two shots behind Thomas on Sunday.

Johnson retained a healthy cushion at No. 1 in the world rankings despite settling for a tie for 48th at The Players.

Collin Morikawa remained at No. 4, with DeChambeau moving up a spot to No. 5 with his tie for third following a victory at the Arnold Palmer Invitational. Xander Schauffele was bumped to No. 6 after missing his first cut in more than a year.

Patrick Reed is No. 7, followed by England’s Tyrrell Hatton, Patrick Cantlay and Webb Simpson in the top 10. Rory McIlroy of Northern Ireland remained No. 11 after missing the cut by 10 shots at The Players.

Lee Westwood continued his charge up the rankings with his second consecutive runner-up finished after holding the 54-hole lead. Ranked 39th two weeks ago, the Englishman is now at No. 19.

France’s Antoine Rozner used his victory at the Qatar Masters on Sunday to climb 31 spots to No. 63, while Talor Gooch rose 18 spots to 64th with his T5 at The Players. That qualified both for next week’s WGC-Dell Match Play event.

No. 66 Erik van Rooyen of South Africa and No. 67 Adam Long both dropped out of the top 64 this week, losing their automatic Match Play spots.

Tiger Woods, who remains in the hospital recovering from leg injuries following a single-car accident, is 56th in the world rankings. Justin Rose’s availability for the Match Play event also remains uncertain after the 38th-ranked player in the world withdrew from The Players with a back injury.

Brian Harman also leapt into the WGC field with his T3 at TPC Sawgrass catapulting him 37 spots to No. 58 in the world. He also climbed 24 spots to No. 23 in the U.S. Ryder Cup standings, just ahead of Gooch, who rose 13 spots.