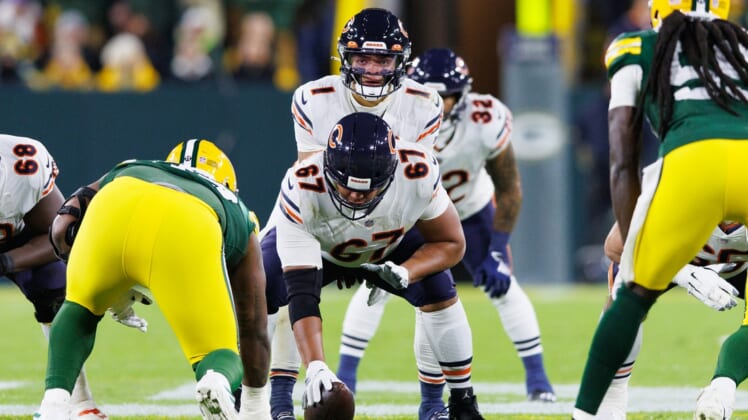 Justin Fields prepared for his NFL debut this season by watching film of Russell Wilson.

Fields will get an even better view Sunday when the Chicago Bears (4-10) travel to Seattle to face Wilson and the Seahawks (5-9).

“Russell does a great job of extending plays, not only him but their receivers they have over there,” Fields said. “They have a lot of explosive plays off scrambles. That’s one thing you can take away from Russell’s game. I’ve always looked up to him. The kind of person he is on the field and off the field. He’s a great quarterback and a great person.”

Fields, the No. 11 overall selection in this spring’s draft, has had a difficult season, completing just 58.9 percent of his passes with seven touchdowns and 10 interceptions. He threw for 285 yards in Monday night’s 17-9 loss to Minnesota, completing a 19-yard scoring strike to Jesper Horsted on the game’s final play.

Fields suffered an ankle injury in the second quarter Monday but kept playing.

“When you’re playing in the game, you’ve got a bunch of adrenaline going,” Fields said. “So (the second quarter) is when I first felt it, but I was still good enough to play through it. Of course, it got worse after the game and the next morning. But it felt better (Wednesday) morning.”

Bears coach Matt Nagy said he expected Fields, who missed Weeks 12 and 13 with cracked ribs, to play Sunday. With backup Andy Dalton in the COVID-19 protocol, Nick Foles would get the start if Fields can’t go.

“You always want to be smart … just like we treat every injury with every player,” Nagy said. “We’ll be more cautious than anything to make sure that every day and every hour that passes that he’s feeling better. Obviously, he played through it, so now we’ve just got to see how it goes and see where he’s at the rest of the week.”

The Seahawks still have playoff hopes, slim as they are, even after Tuesday’s 20-10 loss at Los Angeles, a game that was rescheduled from Sunday because of a virus outbreak among the Rams.

Wilson, who missed three games earlier this season after undergoing finger surgery, had his worst Pro Football Focus grade of his 10-year career Tuesday, going 17 of 31 for 156 yards with no touchdowns and a late interception.

“He’s still got a finger in his throwing hand that is on the rebound,” Seahawks coach Pete Carroll said. “I’m not trying to give him an excuse, and he would never want that. He feels like he’s fine. But the fact remains he’s still got to deal with that.”

“He’s sore,” Carroll said. “It’s a short week, so it could be a factor, but it’s not gonna keep Russ from playing. I don’t think that’s the case at all. So he should be all right.”