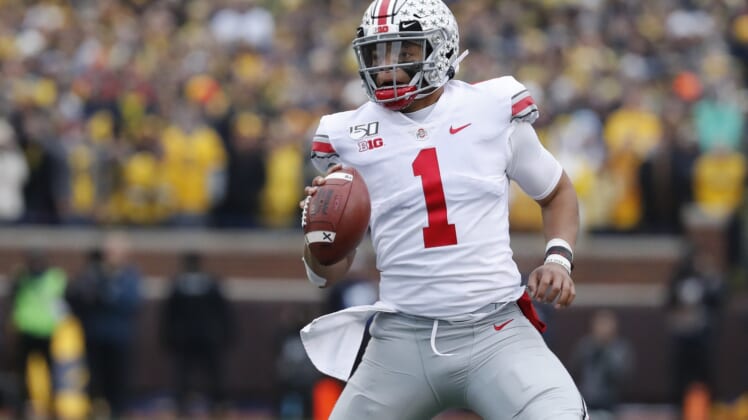 It has seemed to be a foregone conclusion for some time now that Clemson quarterback Trevor Lawrence would walk away with the Heisman Trophy as a junior this coming season before entering the NFL.

With everything up in the air relating to the 2020 college football season, things have also changed in this regard.

The sports book William Hill is now listing Ohio State’s Justin Fields as the favorite over Lawrence to come away with college football’s top individual honor. The odds themselves are rather interesting.

A graduate transfer from Wake Forest, Newman will be tasked with replacing Jake Fromm at Georgia. Having him with the third-best odds to come away with the hardware is rather interesting. Despite being your prototypical 6-foot-4 quarterback, he didn’t do much at Wake to justify this standing.

On the other hand, Rattler will benefit from starting in Lincoln Riley’s system as a sophomore. The former top recruit will take over for Heisman finalist Jalen Hurts, who followed previous winners Baker Mayfield and Kyler Murray under center for the Sooners. At +1,200, he seems to be a pretty solid play.

Though, it does seem that Vegas favors either Fields or Lawrence to come away with the Heisman Trophy should the 2020 season go on as planned.

Fields put up north of 3,700 total yards with 51 touchdowns and three interceptions for Ohio State last season after transferring from Georgia.

Meanwhile, Lawrence had somewhat of a down sophomore campaign for Clemson. Though, he did still put up 46 total touchdowns and just eight interceptions. Lawrence is considered the consensus No. 1 overall prospect in the 2021 NFL Draft.