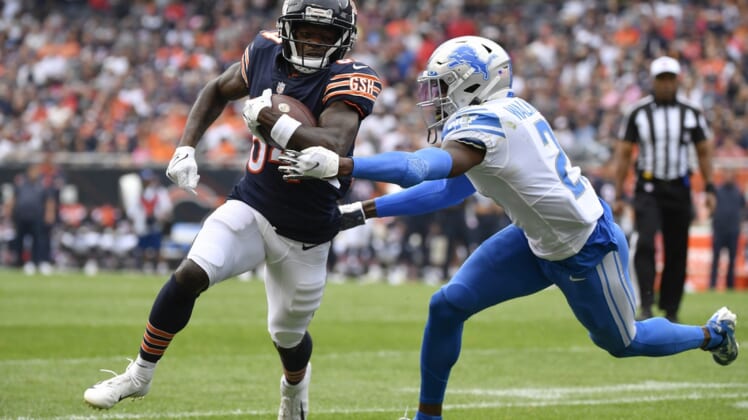 David Montgomery ran for 106 yards and two touchdowns on 23 carries to lead the Chicago Bears to a 24-14 home win over the Detroit Lions on Sunday.

Montgomery left the game in the fourth quarter with a knee injury but helped rookie quarterback Justin Fields notch his first victory as a starter. Fields went 11-of-17 passing for 209 yards for Chicago (2-2).

After gaining just 47 yards of total offense for the game against Cleveland in Week 3, the Bears moved 75 yards on the opening drive of the game, driving down the field and taking a 7-0 lead on a 4-yard touchdown run by Montgomery with 8:49 left in the first quarter.

With 14:51 to go in the second quarter, Montgomery scored on a 9-yard run to give the Bears a 14-0 lead, which turned out to be the score at halftime.

In the first half, the Lions drove inside the Chicago 10-yard line three times, but failed to score any points following two turnovers and a failed attempt on fourth-and-goal from the Chicago 5.

In the third quarter, the Bears took a 21-0 lead on a 4-yard touchdown run by Damien Williams.

Detroit finally got on the board with 3:23 left in the third quarter, cutting Chicago’s lead to 21-7 on a 4-yard touchdown pass from Goff to Kalif Raymond.

The Bears took a 24-7 lead with 14 seconds remaining in the third quarter on a 33-yard field goal by Cairo Santos.

Goff and Raymond then hooked up for another score, this time a 25-yard touchdown pass with 11:21 remaining in the game to cut the Bears’ lead to 10.

Detroit drove inside the Chicago 10-yard line again late in the fourth quarter, but facing a fourth-and-1 from the Bears’ 8-yard line with just over four minutes remaining, the Lions decided to go for a first down instead of a field goal.

The decision backfired when Goff threw an incompletion to turn the ball over on downs. Goff’s pass intended for Amon-Ra St. Brown fell short.