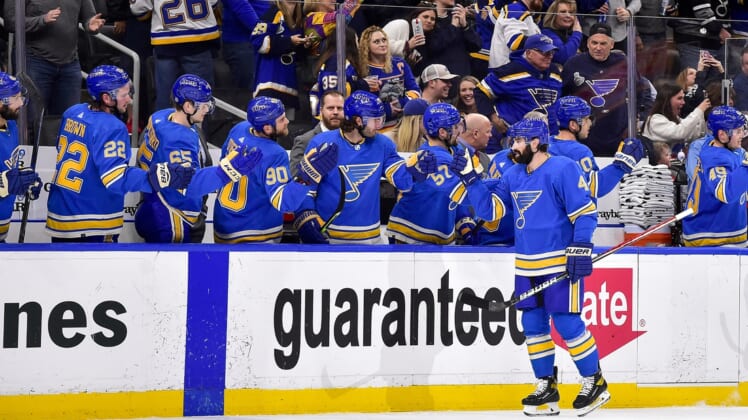 Justin Faulk thrilled the home crowd in St. Louis by scoring two goals in as many minutes to propel the Blues to a 6-1 win over the New York Islanders on Saturday.

Grant Hutton scored and Semyon Varlamov made 25 saves for the Islanders (33-29-9, 75 points), who lost for the second time in three games.

Four minutes into the second period, Faulk tipped the puck past Varlamov to make it 3-0, and then Faulk expanded the lead by volleying home the rebound of a Kyrou shot on a three-on-one break.

New York coach Barry Trotz lost his temper and threw a stick on the ice, costing the Islanders a two-minute penalty that Matt Martin served. Fortunately for New York, the coach’s ire didn’t cost the team a power-play goal.

At 16:57 of the second, Ivan Barbashev made it 5-0. New York answered less than two minutes later with a Hutton wrist shot.

Thomas silenced any comeback thoughts by responding less at 19:20 of the middle period to give the Blues a 6-1 lead.

The Islanders wound up with a 12-5 edges in shots during the scoreless third period. The shot tally for the game finished at 31-31.

Islanders defenseman Zdeno Chara served a two-minute interference penalty for shoving Blues forward Jordan Kyrou in the first period. Kyrou spent the rest of the first period off the ice but came back to play in the second.