Justin Allgaier hits all right notes to win at Nashville 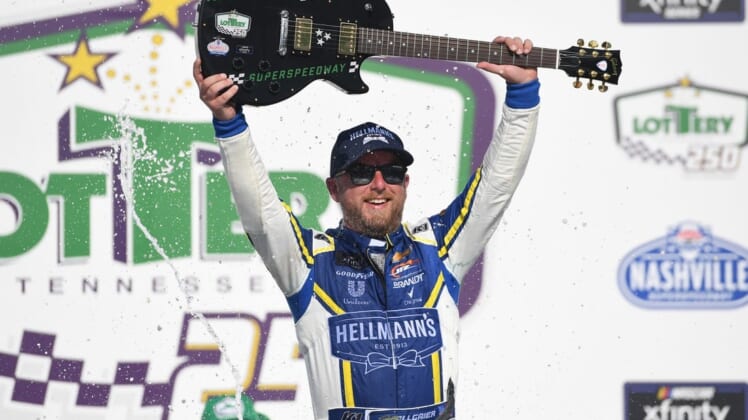 On a blazing hot day at Nashville Superspeedway, Justin Allgaier fulfilled a dream in one of the best race cars he has ever had.

Leading five times for 134 laps and sweeping the first two stages of Saturday’s Tennessee Lottery 250, Allgaier breezed to his first NASCAR Xfinity Series victory on the 1.33-mile concrete track at Lebanon, Tenn., his second win of the season and the 18th of his career.

Allgaier’s No. 7 JR Motorsports Chevrolet crossed the finish line 4.513 seconds ahead of runner-up Trevor Bayne, who overcame an interference penalty on pit road. That was assessed when two of the tires from his No. 18 Toyota rolled behind the gas man into the pit stall of pole winner Riley Herbst.

“This guitar (presented to the winner) has been on my bucket list for a long, long time,” said Allgaier, who won in his eighth start at Nashville, dating to 2009.

After a 10-year pause in racing at the track, Allgaier finished second last year.

Asked whether he had ever driven a better race car, Allgaier was quick to answer.

“I don’t think ever,” he said. “What a heck of a race, man. We’ve been coming here for a long time, and I love this race track. Been trying to get a win so bad and hadn’t been able to do it.

“Today was like a dirt race. It was slick, it was hot, we were sliding around. … I’ve got a guitar to take home, and we’re going to enjoy it, for sure.”

Chevrolet drivers have won the last seven Xfinity Series races, with JR Motorsports drivers winning five of those. Allgaier’s two stage wins were the 11th and 12th straight on oval tracks for JRM.

Herbst finished third, followed by Ty Gibbs and Sam Mayer, both of whom were involved in a late-race incident that turned Gibbs’ No. 54 Toyota sideways-setting up a masterful save.

Mistakes cost Bayne a chance to race for the win.

“We drove to second twice, from the back,” Bayne said. “The second stage, we came in with (Herbst) and hit a pit crew member, not intentionally, but it can happen. Then fell back to 15th and drove back to second.

“Then we had a loose wheel and had to go to the very back and drove back and was catching Allgaier. He’s my buddy, Gator, congrats to him. Happy for him, but, man, I wanted to win that guitar and win here at Nashville.

Herbst conceded that he wasn’t able to challenge Allgaier’s dominance.

“I don’t think the whole field had anything for the 7,” Herbst said. “I think he was on cruise control all day, but our Monster Energy Ford Mustang was really good. I’m just proud of us as a group. Way to execute.

“I messed up on pit road a few times, myself and the team, so we’ve got to clean up a little stuff there, but all in all, it was a good day. We got a pole and good points. This is what we need to keep doing. Just knock on the door, and eventually it will open.”