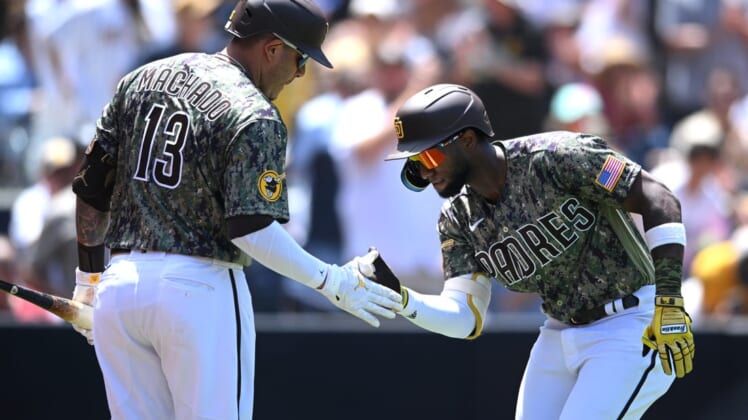 Jurickson Profar homered and later scored the winning run on a bloop single to right by Luke Voit as the San Diego Padres defeated the visiting Minnesota Twins 3-2 in the rubber match of a three-game series.

Sean Manaea (6-5) picked up the win for the Padres, holding the Twins to two solo home runs among four total hits and three walks with seven strikeouts over six innings.

Twins starter Dylan Bundy had retired seven straight Padres and was working with a 2-1 lead when Trent Grisham singled leading off the bottom of the sixth. Profar singled to put runners at the corners with no one out.

Former Padre Emilio Pagan replaced Bundy and retired Manny Machado on a fly to center. But Jake Cronenworth singled sharply to right to tie the game and Voit dropped a single down the line in right to drive in Profar with the go-ahead run.

Bundy (6-5) gave up three runs on just four hits and no walks with three strikeouts in five-plus innings.

Luis Garcia picked up his first save for the Padres after Bob Melvin at least temporarily relieved the struggling Taylor Rogers of his closer duties earlier in the week. Garcia, with his fastball touching triple digits, had one strikeout in a perfect inning. Earlier, Padres relievers Nabil Crismatt and Tim Hill each worked a perfect inning in relief.

Profar gave the Padres a 1-0 lead with two outs in the third when he homered into the short-porch boxes down the right field line. The homer was Profar’s 11th of the season and his second in a span of three at-bats.

The Twins tied it when Luis Arraez led off the fifth with his sixth homer, a drive to right center off Manaea. Tim Beckham and Gilberto Celestino then followed with back-to-back singles and a sacrifice bunt by Caleb Hamilton put runners at second and third with one out.

But Manaea got out of the jam by striking out Byron Buxton and getting Jorge Polanco to ground into a forceout after Carlos Correa was intentionally walked.